The history of the Bertone Lancia Kayak could be called a vanitas triptych: it is a story of illustrious history, great beauty, and its transience - and that times three. 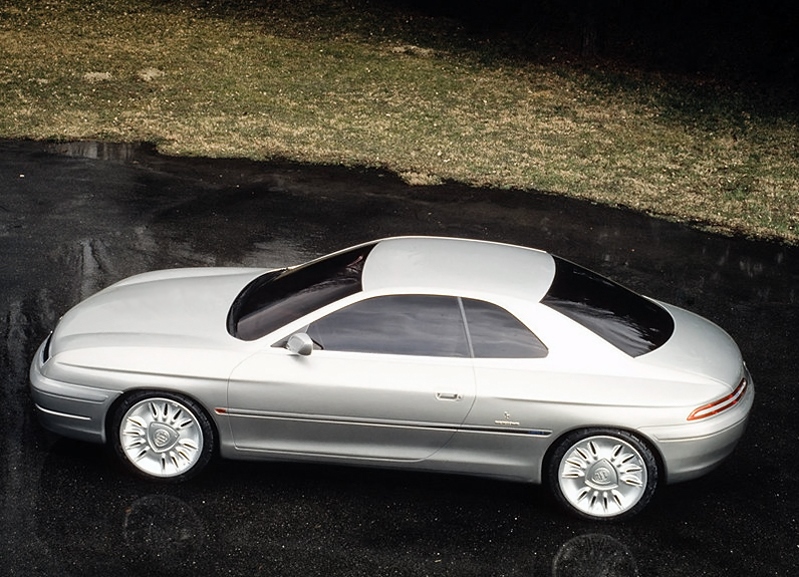 Illustrious history
The first part starts in 1906, when Vincenzo Lancia establishes the brand that bears his surname. Lancia is one of the oldest car manufacturers in Italy, and certainly not just any of the them. Vincenzo was not only a successful driver, he was very innovative as well, so his brand introduced the a lot of technical innovations. In combination with Italian design, this results in many admirers. That applies to many models, but certainly also to the coupés, which fire the imagination.

Part two of the triptych begins in 1912. In that year, Giovanni Bertone established a workshop for coaches that, from the end of the First World War, mainly focused on cars. The Bertone company is growing into a big name in car land, not least because of the designs they make for brands such as Alfa Romeo, Fiat, Ferrari, BMW, Citroën and Lancia. From 1959 to 1965, master designer Giorgetto Giugiaro was attached to the agency, and from 1965 to 1980, Marcello Gandini makes the brand rise to even higher altitudes. Bertone's design studio can compete with compatriots such as Pininfarina and Zagato, the international crème de la crème in car design.

The third part of the triptych is of a later date: in 1995 the result of a collaboration between Bertone and Lancia is revealed in Geneva. Bertone has drawn a beautiful coupé on the technique of the Lancia Kappa (with a palindrome as a name). It is so satisfying that a working prototype is presented a year later. 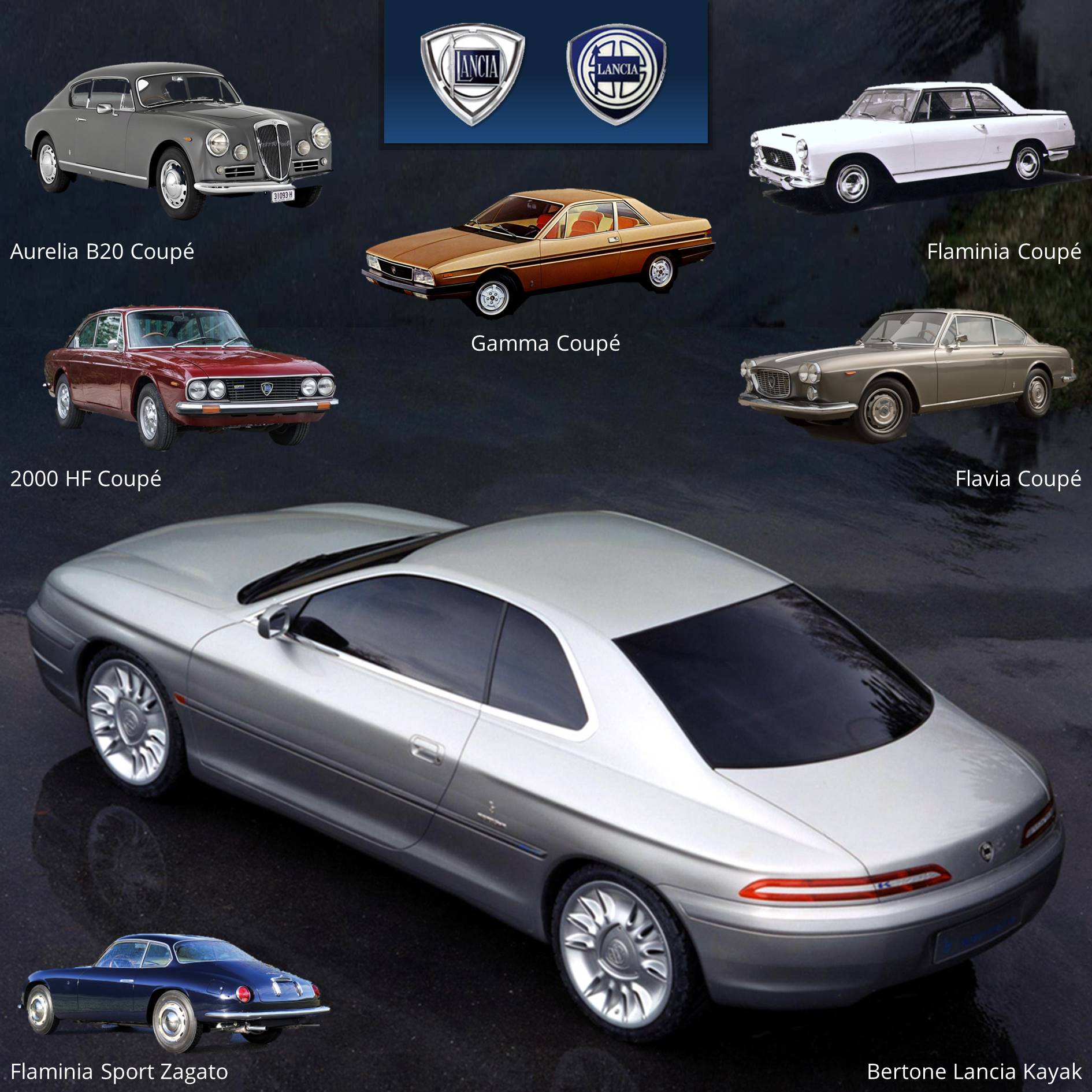 Great beauty
With the Kayak, Bertone has designed a classic coupé, which fits in formwise with the brand portfolio and which is clearly a child of its time. Yet the model also has some remarkable features. There is a grille over the full width of the nose, behind which the headlights are hidden. In that I see a wink to the 2000 HF Coupé, where the headlights are integrated in a car-wide grille. Freely translated, Bertone himself called the model 'an Aurelia B20 for the year 2000'. I see the reference to that car especially at the back of the Kayak, which, just like the one on the Aurelia B20, slopes down very smoothly, and ends in a low and fairly round trunk.

It is also noteworthy that the rear bumper already runs in very shortly behind the rear wheels, just like the flat rear lights that run from quite far over the flanks to close to the center of the boot lid. It shows the brand and type name in the gray area in the red frame of the rear lights. Those fittings are actually the only thing I can remember from the past; I have seen a picture of the Kayak somewhere as a teenager, but I don't remember where. The front of the car didn't stick in my mind either, but the rear lights did, because I found them to be extremely beautiful in shape.

Now that I have looked up the car again and have looked at the design a bit better, I see more beautiful inventions. Take, for example, the folds above the wheel arches: these are positioned in a way that the coupé ratios are underlined. The fold doesn't extend the full length of the car, but is interrupted in the middle, so that only the desirable parts get an accent on the length. Something similar can be seen on the Alfa Romeo 156 of 1997. In addition, the folds ensure that the sheet metal runs a little inwards, so that it runs out a little below the fold and the wheel arches appear rounder and wider than they are. That in turn ensures that the car seems to be a bit more solid on its wheels - it has stance, designers say. In combination with other design elements, the overhangs appear shorter, which in turn contributes to the sporty appearance of the car. If you see it on images, it doesn't look like a car of almost 4.70 meters (15.42 feet) long, but it is. 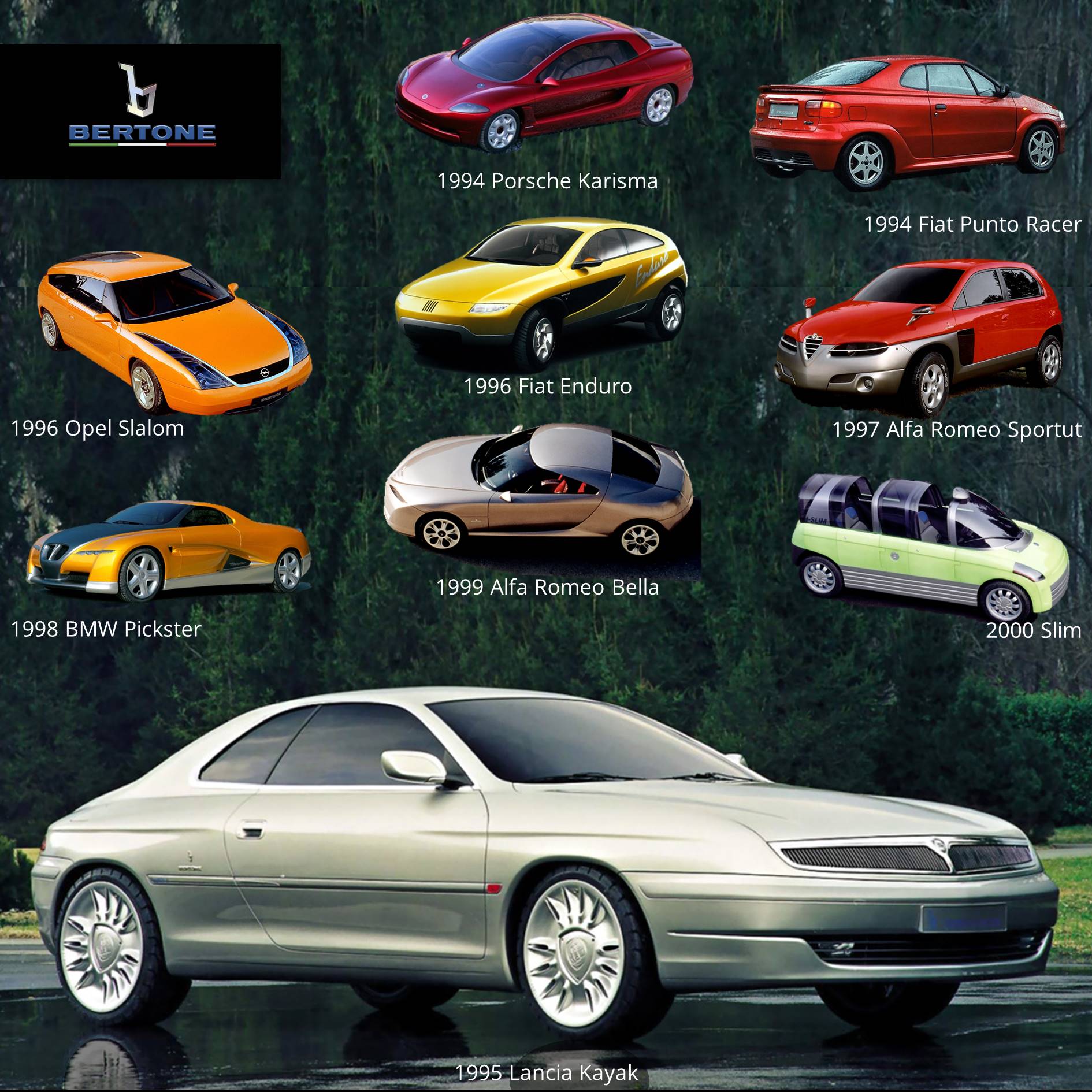 Concept cars by Bertone from around 1995

Transience
Unfortunately, the story ends a lot less euphorically - I wasn't talking about a vanitas triptych for nothing off course. To begin with, the Kayak never passes the stage of a moving prototype. Lancia has designed a coupé based on the Kappa, and there is no room for two coupes in the same segment.

That the Kayak becomes a museum piece is not the only disappointment for Bertone. The design house closes its doors in 2014. If you now go to bertone.it it says very hopefully 'Bertone is back', but from the code of the site can be deduced that that message has been there already since September 2019. The new owner's LinkedIn page says that a new model will come unto the market in 2021. Fingers crossed, but right now the glory days of Bertone seem to be over.

Glory days are also a thing of the past at Lancia. The brand still exists, but only supplies one model – the Ypsilon – and only on the Italian market. The fact that they nevertheless sold more cars than Alfa Romeo in 2019 sounds positive, but I'm afraid that says more about the sales numbers of Alfa Romeo than about the success of Lancia. On the international website it says very nicely 'Discover the Lancia DNA', but even the brand itself seems to have erased its history: according to the site, the brand DNA consists solely of the current Ypsilon... 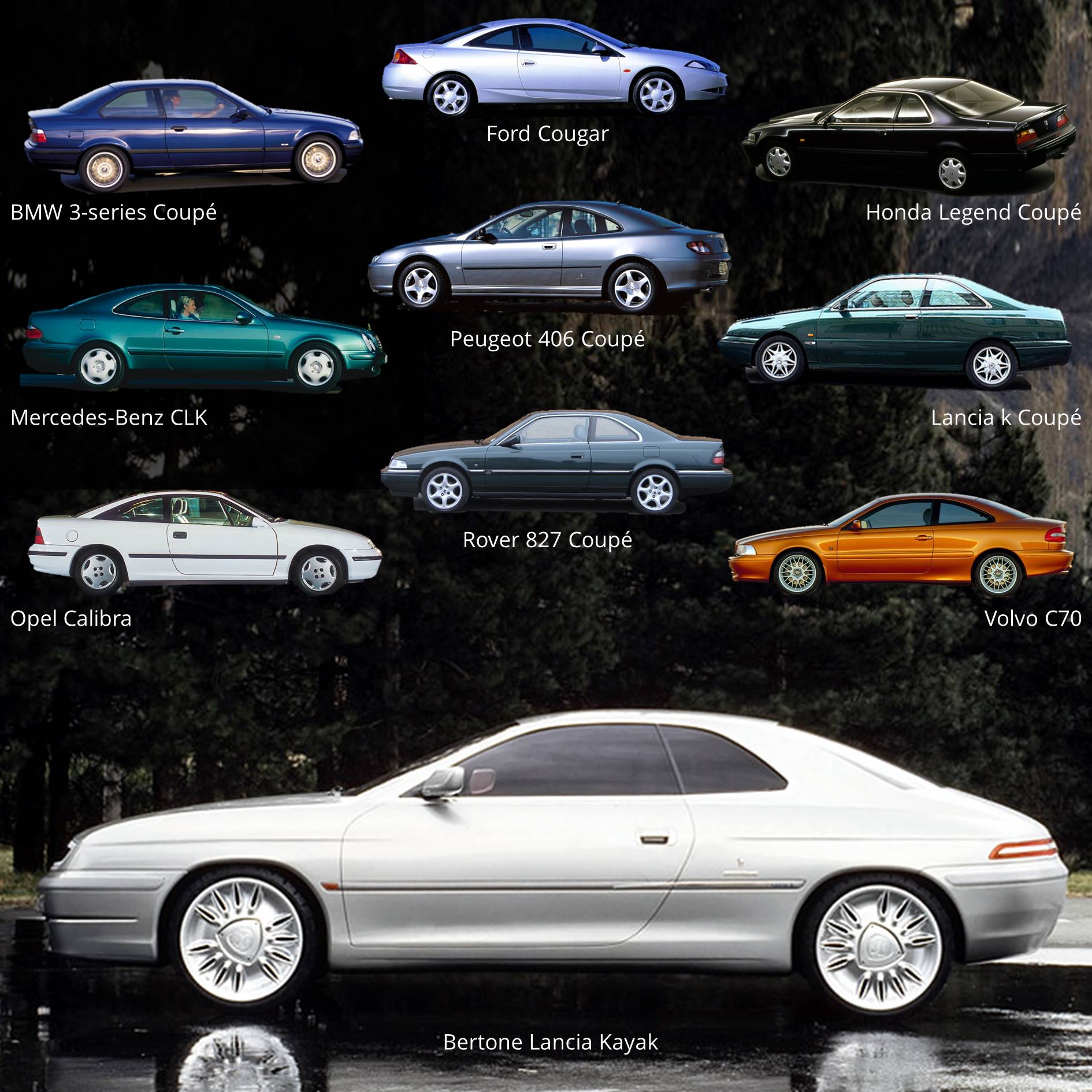 Luxury two-seater coupés from the 90s

Electric Kayak?
So then, is there nothing but trouble, affliction and transience to end this piece with? Well, there might be a little bit of hope. Fiat Chrysler Automobiles, the owner of Lancia, is planning to merge with Groupe PSA, known from Peugeot, Citroën and Opel, among others. Maybe Carlos Tavares, former PSA and the new CEO, knows better how to value the Lancia brand. I can imagine Lancia can be turned into a beautiful luxury brand with electric cars, like a kind of Italian Mercedes-Benz of the future. Of course with a luxury two-door coupé in the line-up, as an imagebuilder. Silently sliding through the traffic on electrical power fits very well with a modern Kayak, I think. They can adopt the rear lights one to one; as a LED ring of course.

MY CLASSICS
In the My classics section, I add a model to my digital collection of classics every other week. For that, I select cars whose design appeals to me or evokes memories. So nostalgia, and very subjective. Hence the section title: my classics.
In the next episode: A smart concept at the right time...