Geneva, 1968: The 55 Coupé designed by Michelotti is premiered at DAF. At the same time, Michelotti shows the Siluro on his own stand. This coupé, a fully functioning one-off on the technical basis of the DAF 55, is a convincing showpiece of the master, and not only because of its progressive design. 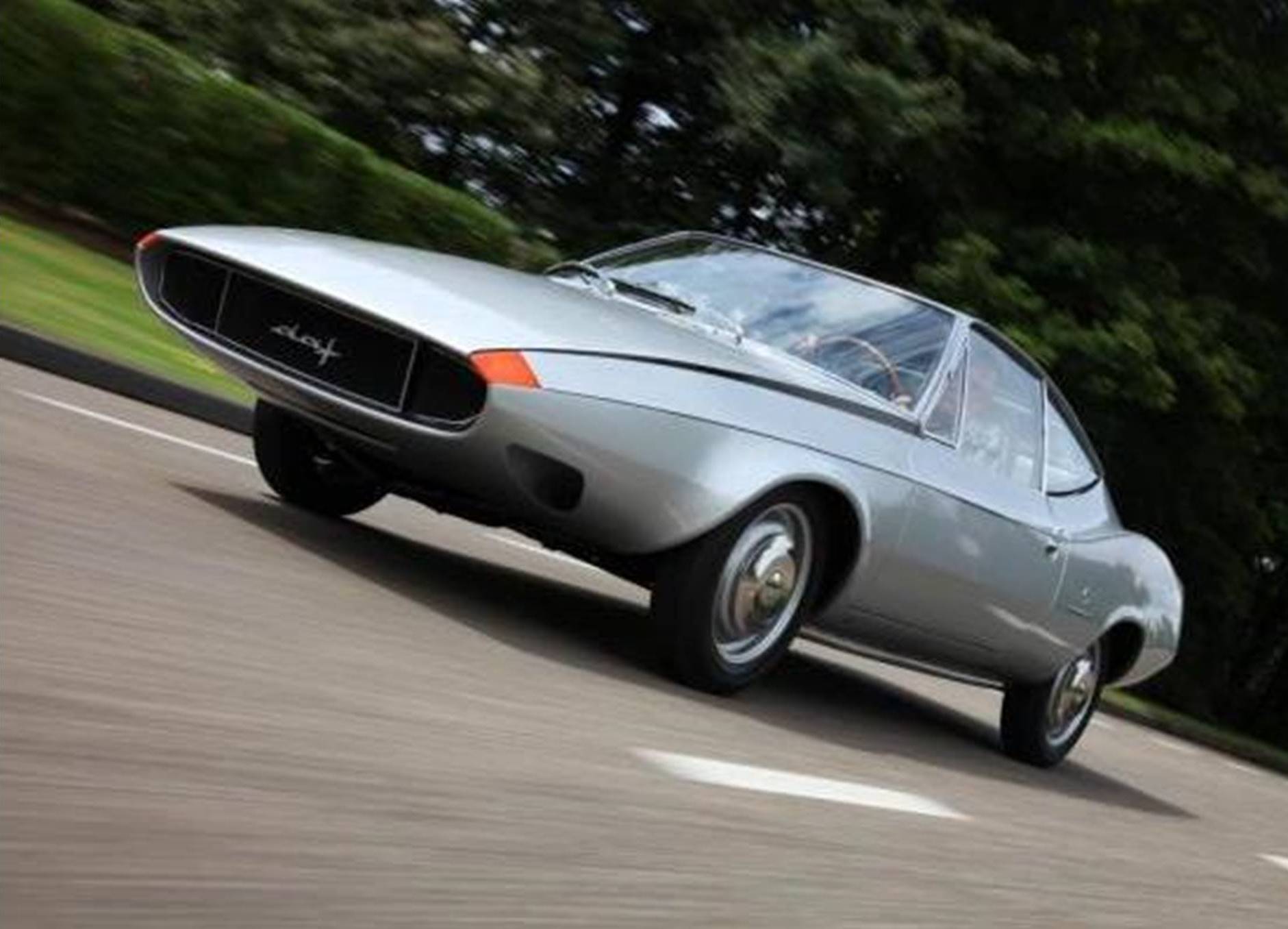 Own stand
At the end of the 1960s, Giovanni Michelotti had three major clients: BMW, DAF and Triumph. In addition, he built unique cars for individual customers, usually based on an existing car, such as the DAF Shelette in the photo of Geneva, a bit below. That apparently gave him sufficient resources to regularly design and build a model in his own name. That way the otherwise quite modest Giovanni could show what his studio was capable of. At the time you did that at the big auto shows, so Michelotti arranged for him to have his own stand at Geneva, one of the largest European auto shows. That was not without a struggle: to get your own stand, you had to have at least fifty employees, and Michelotti did not have that. So he hired people temporarily – some of them so temporarily, that when they signed their contract, they immediately already handed in their letter of resignation. As we say in Friesland: As it net kin sa't it moat, dan moat it mar sa't it kin*. 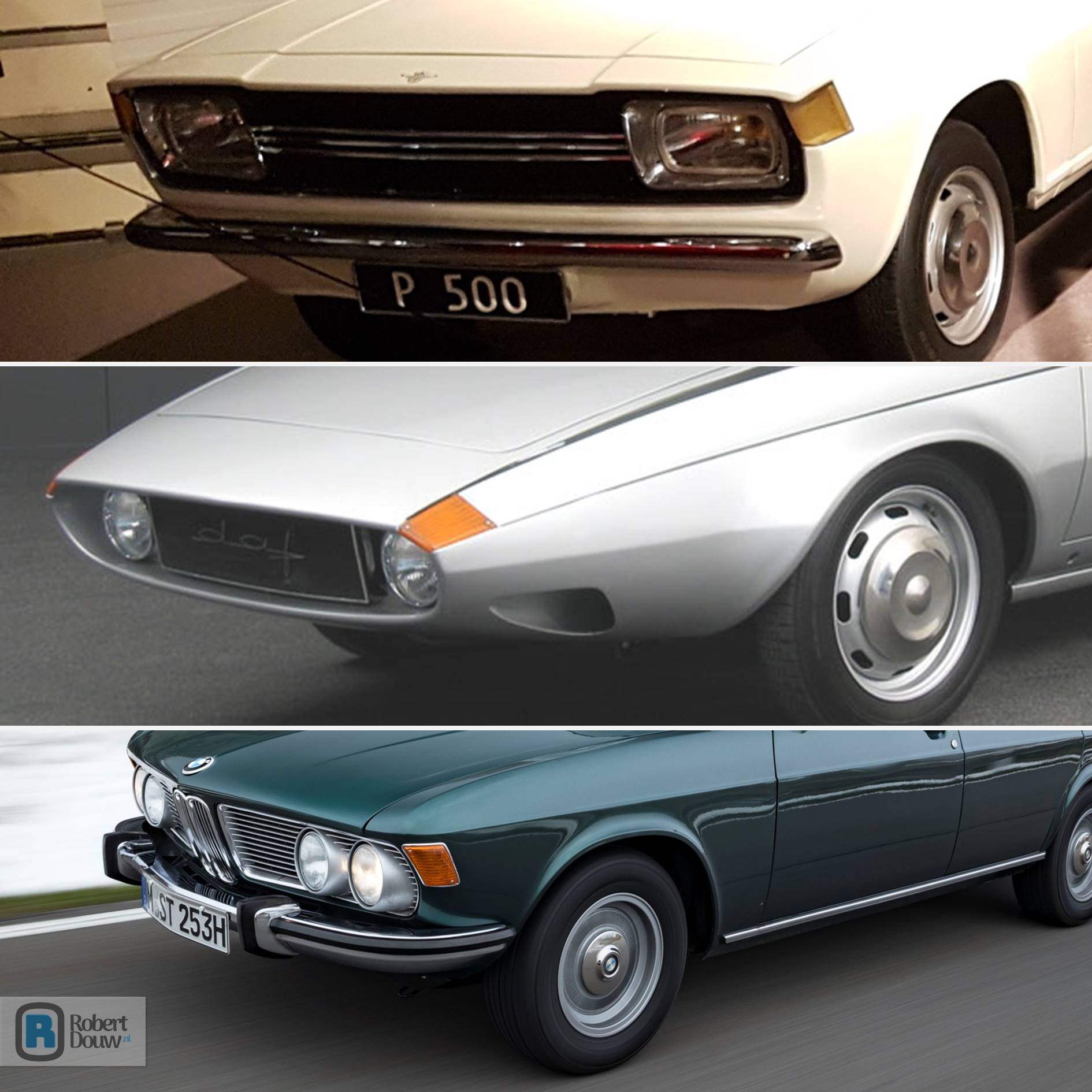 Torpedo
At the 1968 Geneva show, DAF introduced the 55 Coupé, an elegant but fairly everyday design by Michelotti. Probably more everyday than he would have liked, because Giovanni was a progressive designer. He showed that at the same show with the Siluro (Italian for "torpedo"), and that car must have come as a real bombshell. It was one of the first cars with a wedge shape combined with sharp edges and smooth surfaces, which would become fashionable in the next decade, especially among sports car manufacturers. DAF engineer Van der Brugghen writes about Geneva ’68 that both coupés drew a lot of attention: the 55 Coupé for its accessibility, the Siluro for its very beautiful lines. Distinctive Michelotti elements in the design of the Siluro are the thin window pillars and the design of the direction-indicator lamps at the front. Michelotti applied a similar design for those blinkers to several BMWs and to the DAF P500, a prototype for a larger model that never made it to series production. Furthermore, the front end was not only remarkably aerodynamic, but also remarkably sleek and plain designed. This was largely because the headlights were hidden behind grilles that optically formed a unit with the center grille. 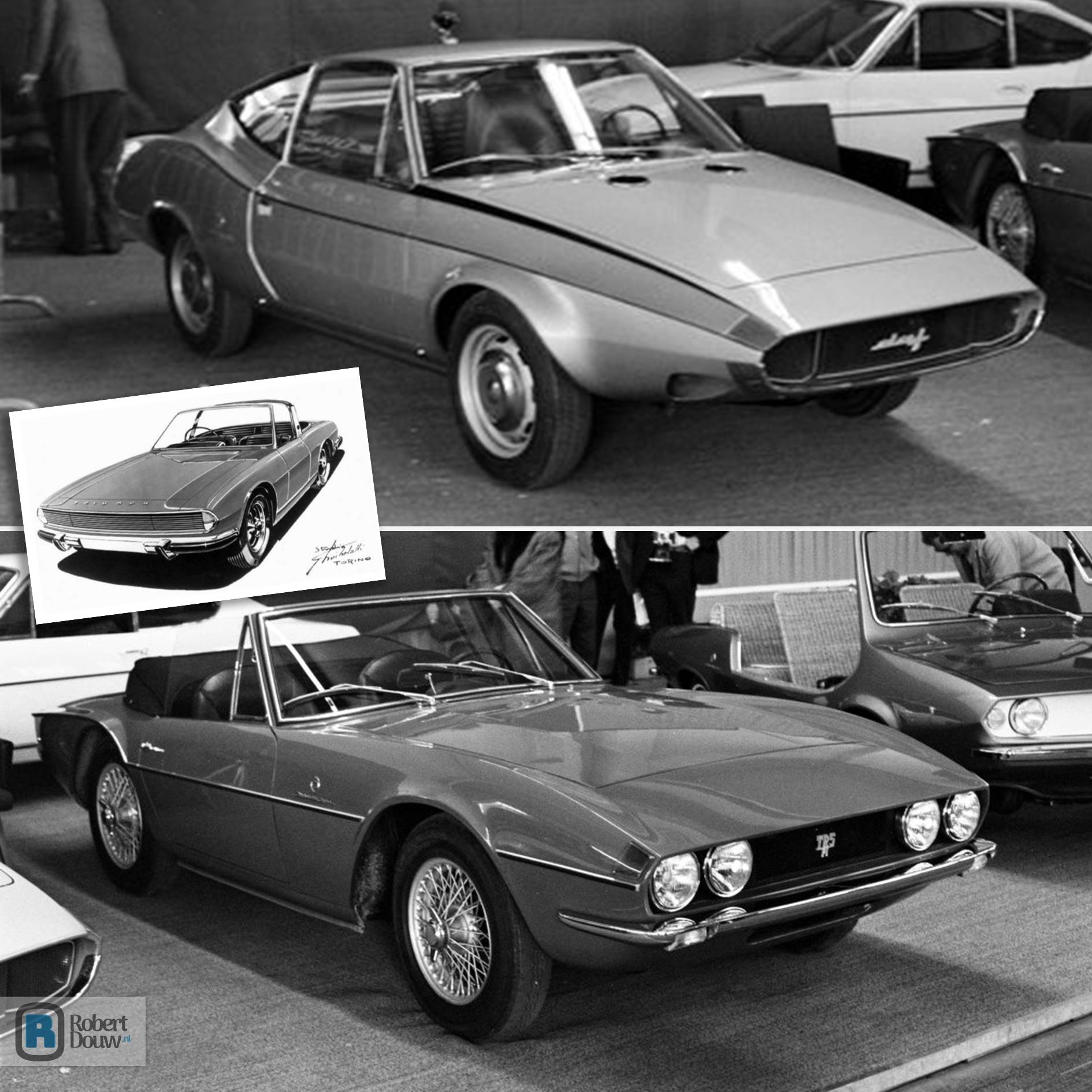 DAF Siluro in Geneva, with next to it the Triumph TR5 Ginevra, which is also in the picture below. To the right of the TR5 Ginevra you can see a part of the DAF Shelette. Inset: Michelotti's design for the Triumph Stag, with hidden headlights.

Shamefully good
Hiding the headlights behind the grille, that's something Michelotti also did with another design for his own account: the Triumph Stag. That model is also a great illustration of how progressive or at least painfully modern Michelotti's designs were. The designer had built the original prototype for the Stag as a promotion of his ability, just like the Siluro. Both cars were to stand side by side on the Michelotti stand in 1968. Until Harry Webster of Triumph saw the car a few weeks before the start of the Geneva Salon on a visit to Turin – he bought it right away: the car was far too modern compared to what Triumph itself could show. In return, Webster sent a TR chassis to Turin, where it took Michelotti just two weeks (!) to design and build the TR5 Ginevra. However, that also looked much more elegant and modern than the TR6 that Triumph introduced in the same year, which, according to an engineer from the British, created 'a great deal of embarrassment at our head office'. 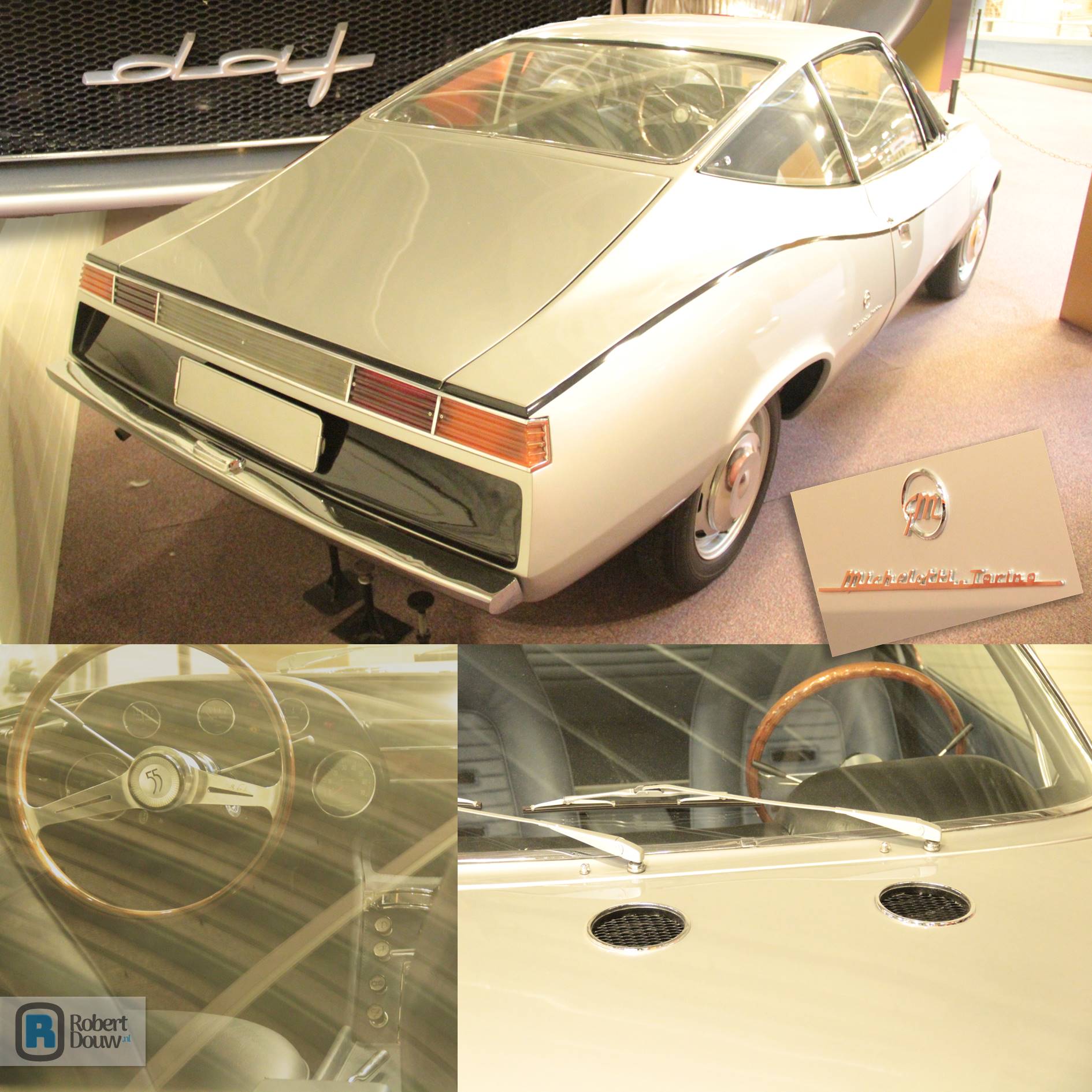 Different views and details of the DAF Siluro

More than beautiful
Back to the Siluro. As mentioned, Michelotti was not only progressive in the design of his coach work. In the late 1960s, car safety began to play an increasingly important role. Michelotti responded to this with several inventions that he had patented. His son Edgardo, in his book, speaks of patents that describe 'a particular form of construction that concerns the frontal and lateral components of a car's bodywork, with the purpose of limiting considerably the severity of injuries to people involved in motor-accidents'. A somewhat vague and general description, which makes me curious about the precise content of the ideas. Edgardo also mentions the patent number, but unfortunately I was unable to find the patent online. Be that as it may, the Siluro would be the first car to which Giovanni Michelotti applied his patented inventions. 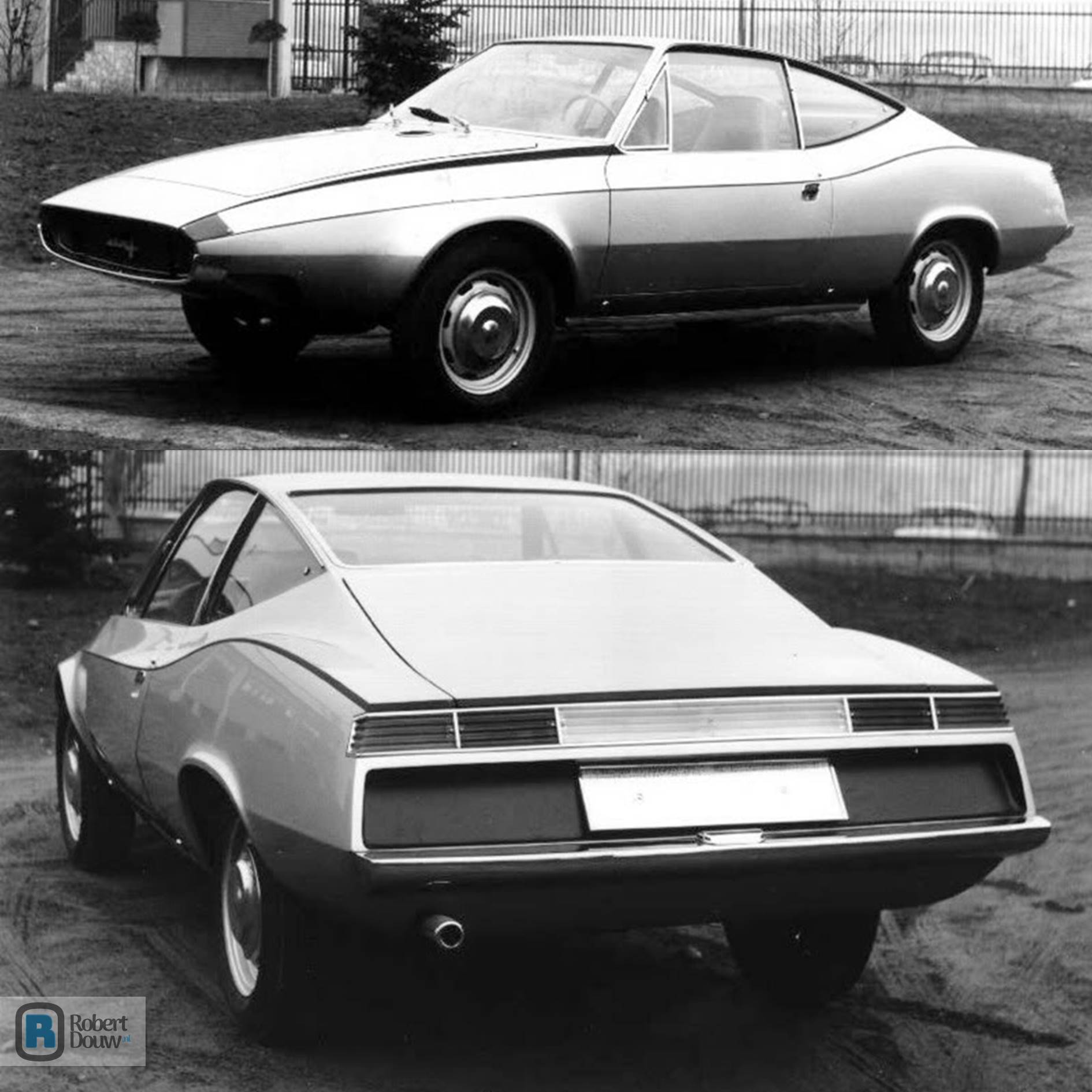 Archive photos of the DAF Siluro

Former glory
After being exhibited at various auto shows, the Siluro was used by son Edgardo for a time as a transport to university. The Siluro was one of the designs that Giovanni was said to be most proud of, and for Edgardo the coupé shall also be associated with quite some memories. It's therefore not surprising that after Giovanni's death in 1980 the Siluro stood for many years as a memento in the garden of the Michelotti family. Unfortunately, that didn't do the car any good, of course. In 2002, after standing outside for more than two decades, overgrown and inhabited by all kinds of animals, the Siluro was bought by a German trader. He immediately contacted the DAF Museum, which luckily seized this unique opportunity with both hands. They completely restored Michelotti's showpiece. One of the volunteers of the DAF Museum, Ad van Geel, has two videos of the Siluro on YouTube. These videos are a bit amateurish, but it's nice to see the Siluro driving. Today, the show car is in the DAF Museum, doing once more what it was made for: showing what a masterful designer Giovanni Michelotti was.


MY CLASSICS
In the My classics section, I regularly add a model to my digital collection of classics. For that, I select cars whose design appeals to me or evokes memories. So nostalgia, and very subjective. Hence the section title: my classics.


I took the photos in and of the DAF Museum myself. The other images come from the following sources: