My top three of Dutch visual artists consists of Rembrandt, Van Gogh, Mondriaan and Ader; you can choose which two should finish joint. They all belonged to the avant-garde of their time. The work of all four fits in with the respective spirits of the times, but in their time, they all went their own way.

Rembrandt van Rijn was a master in directing the viewer's gaze by highlighting the most important thing in the painting and working it out in more detail than the rest of the painting. He often used
a strong light-dark contrastalso called clair-obscur
. He also had a remarkably loose
touchthe way of applying paint to the basis
for an artist of his time and with that he knew better than anyone else how to suggest things like reflection and
fabric expressionthe representation of a certain type of material on a painting
. Vincent van Gogh is known to be very impressed with Rembrandt's work. According to Jeroen Krabbé, he was particularly moved by the painting that became known as 'The Jewish Bride'. I think it is plausible that Rembrandt's loose touch was an inspiration for the well-known way of applying paint Van Gogh developed. 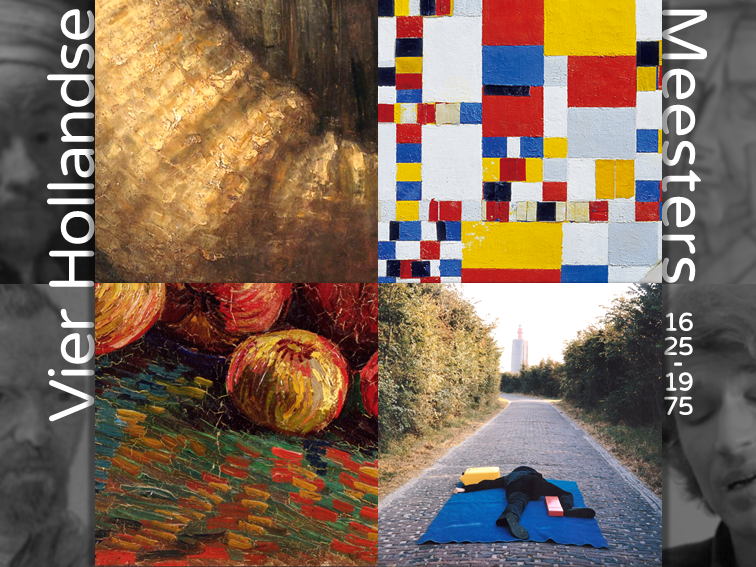 Vincent van Gogh [ˈvɪnsɛnt vɑŋ ˈɣɔx] had a great sense of color and made extensive use of color contrasts, in particular the complementary color contrast. That assumes that you put additional colors next to each other. There are three primary colors in traditional color theory: red, yellow and blue. Together with the non-colors white and black you should be able to mix all other colors with it. If you have used red, then yellow and blue remain; together they form green, so green is the complementary color of red. In the same way, yellow is supplemented by purple and blue by orange. Take a look at the (later) paintings by Van Gogh; you can't miss it.

Van Gogh is one of the first artists to take a step away from reality in their work. Mondrian - and the others who formed De Stijl with him - eventually went one step further. Eventually, because his early work is still really
figurativewith a recognizable representation
. And just like Van Gogh, Mondrian used more earth tones in the beginning and gradually started using more bright colors and strong contrasts. In addition, Mondrian increasingly
stylizedstylize: simplify the forms
the shapes in his work, so that the representation became less recognizable, with the famous
abstractwithout recognizable representation
compositions as end result.

In his art - in line with Rembrandt and Van Gogh, but even more explicitly - Mondrian searched for a way to lift art to a higher level. He ultimately only used the three primary colors and white, gray and black to achieve this. Moreover, he limited himself to horizontals and verticals. As I wrote before, Bas Jan Ader referred to this in some of his works. Nevertheless, in my view, Mondrian is not the only Dutch Master who would fit in an exhibition with Ader. And it is quite possible that Ader, who also called himself a Dutch Master, would agree with me on that. Ader often used himself in his work, with which, in a sense, he made self-portraits. And what artist is famous for his self-portraits? Indeed, Rembrandt. But the answer might as well be "Van Gogh".

I suddenly have visions of a great exhibition... Rijksmuseum, Van Gogh Museum, Kunstmuseum Den Haag and Boijmans van Beuningen, what do you think of it? Four Dutch Masters, 1625 - 1975. Four of such iconic Dutch artists may still be celebrated! (In Dutch there is a word play between vier 'four' and vieren 'to celebrate'.) I have already designed a poster.