A while ago I read Queen guitarist Brian May's book about his Red Special (a must for guitar enthusiasts) and after reading the word guitar many times, I suddenly wondered why there is a 'u' in that word. After all, you don't hear it in the pronunciation. And in Dutch we also write it without: gitaar. 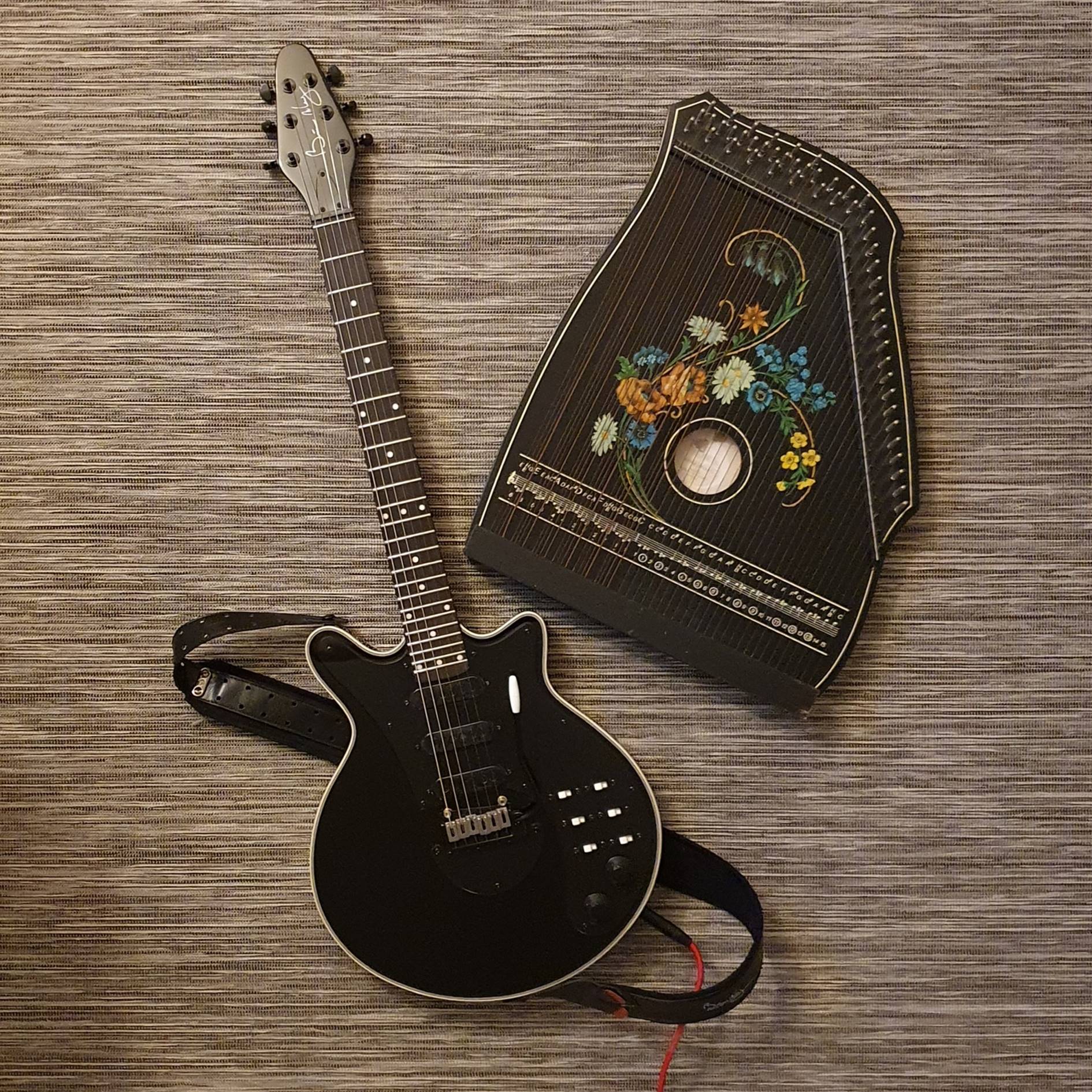 An electric guitar (BMG Special 'Metal May') and a zither (Musima)

People make music
Music is inextricably bound up with human history, and the oldest instruments date back to long before the oldest written sources. Musicians are listed in Genesis 4 as one of the oldest 'professional groups', along with cattle breeders and blacksmiths. And psalm roughly means 'a song to be sung to the accompaniment of stringed instruments'. Stringed instruments were common in many ancient societies and came in all shapes and sizes, with just as much variation in the number of strings. In addition, different cultures came into contact with each other at different times and in different ways, which is sometimes difficult to reconstruct afterwards. The same goes for the names of those instruments. What is clear – and what the various sources I have consulted agree on – is that for the origins of guitar and gitaar we must at least go back to classical antiquity.

Several routes from the kithára
In classical Greece, let's say around 500 BC, there were several stringed instruments, of which the kithára (κιθάρα) was one. Latin cithara and Arabic qītār were derived from the name of that instrument. From one of those two, Spanish guitarra was derived, which the French made guitare from. In English that eventually became guitar. Hence the 'u' in guitar. Early New Dutch (about 1500-1700) also took the name of the stringed instrument over from French, as guitar or guitarre, so also with a 'u'. But this is where things get interesting: as it happens, in Middle Dutch (approximately 1200-1500) the word was already borrowed from French as well, but then as ghitarne or a variant thereof. The two forms seem to have coexisted or intertwined with each other in the centuries since. Whether the final form gitaar we now have in Dutch can be traced back to one of the two, or perhaps a bit to both, is not really clear to me from the etymological dictionaries.

Zither and sitar
What does become clear to me is that the guitar is not the only instrument that originated from the kithára, both in appearance and etymologically. The Latin form cithara was also taken over directly (so not via Spanish) by French, namely as cithare. From that, in the end we derived the instrument name citer in Dutch. The Germans did the same: in Old High German as zit(h)ara, which eventually became Zither, and that's how the instrument is still called in German today. According to the Online Etymology Dictionary, that German word was adopted into English around 1850, where it is also still written as zither today. Frisian knows the instrument as siter, which is pronounced the same as in Dutch, but in terms of spelling is more like the name of another stringed instrument, the sitar. However, that name does not come from kithára, but from the Persian se tār, which means 'three-stringed'. According to some, kithára is derived from se tār, but opinions are divided; it's not possible to say for sure whether the words are related. In any case, the name of the sitar has been adopted much more recently by most European languages, including English (around 1845) and Dutch (after 1950). This is clearly visible when you put the names for the guitar, zither and sitar next to each other in different languages ​​descending from Proto-Indo-European, in which I have limited myself to a number of major languages ​​that use the Latin script – in almost all those languages the sitar is called exactly that, while there are many variations with guitar and zither:


Guitar zither
To conlude, one last thing about the guitar and zither. The name of both instruments is derived indirectly from the Greek kithára, as we saw earlier. I therefore thought it would be nice to photograph two of my instruments together: my most recent purchase, an all-black replica of the electric guitar that Brian May once built with his father, and the also black zither, which I got a while ago. When I looked up some more information about that zither, I found out that there are two types of zithers. There is a version with frets under the strings on the left, called a concert zither, and there is a fretless version, like the one I have and that you can see in the picture above. This variant of the zither is sometimes simply called zither, but is sometimes also referred to by the curious name guitar zither. So, actually a kithára-kithára.


WEST GERMANIC
In the West Germanic section, I regularly discuss a word that strikes me. I look at the meanings and forms of the word, and especially at where the word originates from. With that I compare the four West Germanic languages Dutch, English, Frisian and German, with the occasional inevitable trip across the fictional West Germanic border.