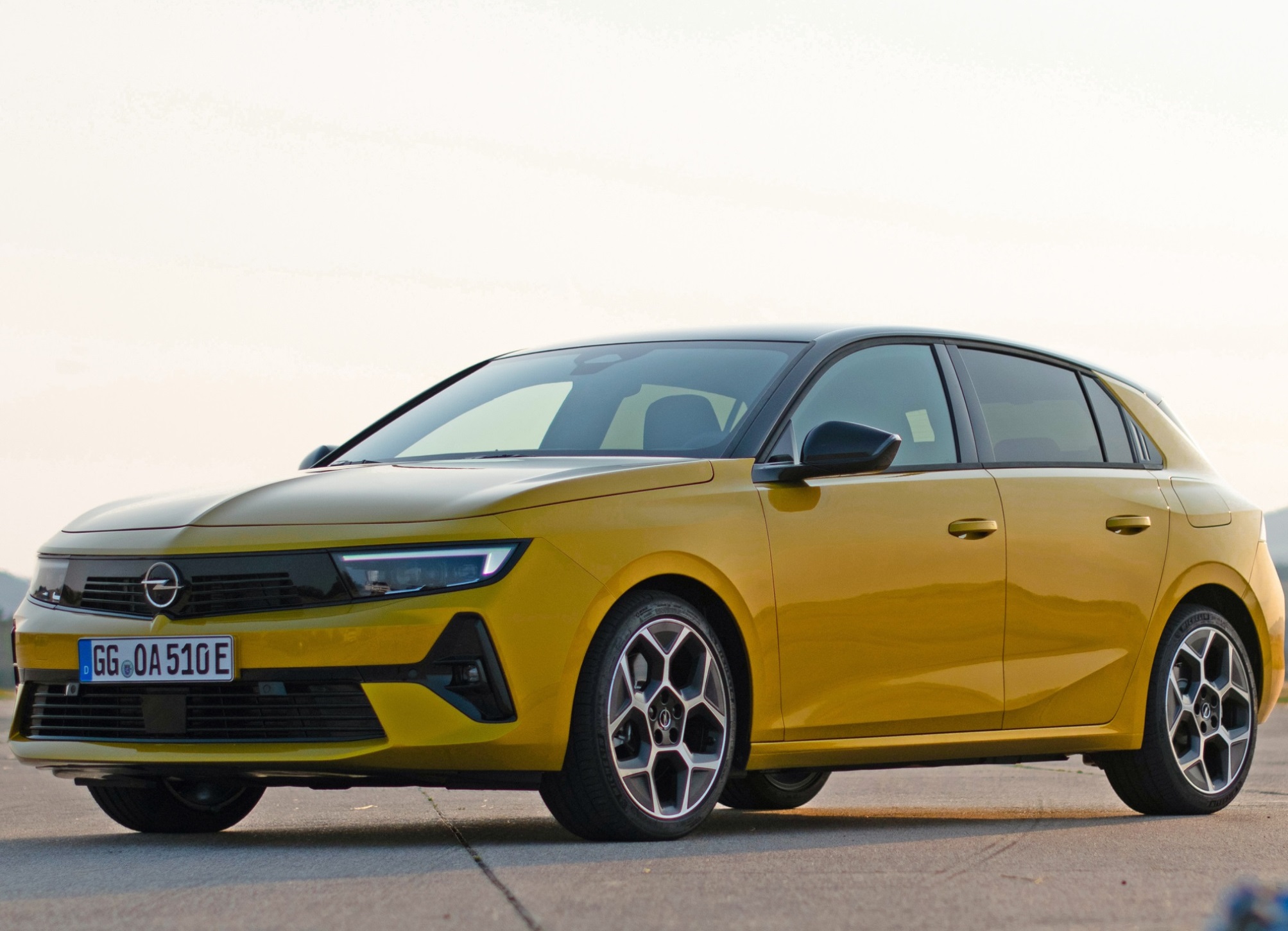 In many contemporary car designs, a lot of references to the brand's heritage can be found. Some of them are intended that way by the designers, others may not. In this section I describe the references I see, this time in the Opel Astra. In 1898 the sons of Adam Opel, the then deceased founder and namesake of the company, started building their first car; the beginning of Opel's success story. 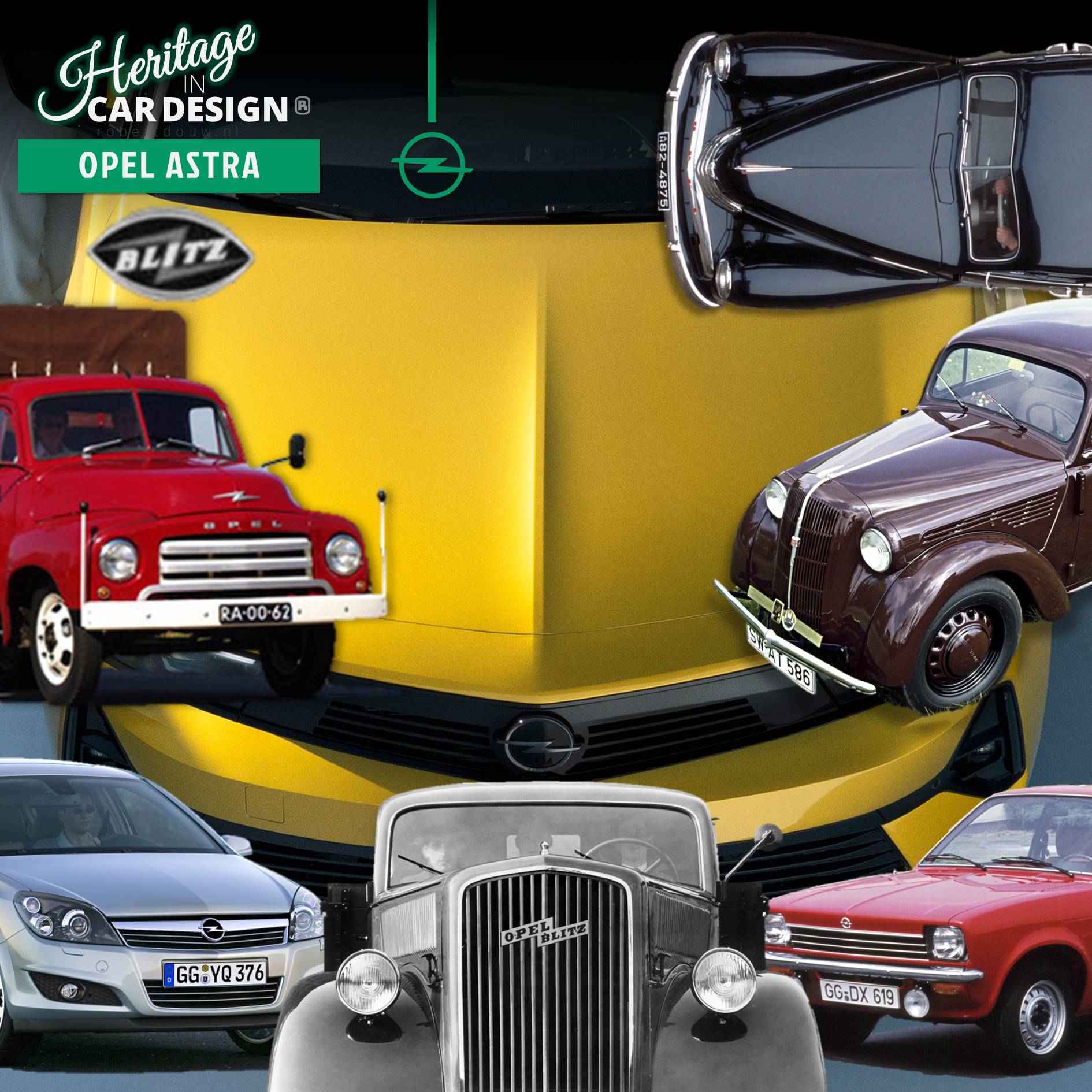 Crease and Blitz
The new Astra has a pronounced crease along the length of the bonnet, or rather a strip bounded by two creases. If you go back in the history of Opel, you will encounter such an accent on the bonnet quite early on. For example, the 1936 Opel Kadett (the brown car on the right in the picture) has a chrome strip there, and on the bonnet of the 1951 Kapitän (the black car above) you really see a crease. That line keeps coming back for a long time, up to and including the Opel Kadett (C) from 1973 (the red car at the bottom right). From the D-Kadett (1979) Opel opts for a completely smooth bonnet without a crease, up to the 2004 Astra H (bottom left). From that model on, the crease is back on Opel's small family car, with an extra accent on it on the latest Astra.

If you follow the crease over the bonnet, you will end up at the logo with the lightning bolt. That goes back to a truck, the 1931 Opel Blitz. On it is a logo with the word BLITZ and a lightning bolt running through the I; after all, Blitz is the German word for lightning. On the front end of the 1936 Blitz, OPEL and BLITZ are placed diagonally below each other, and on the 1950 Blitz, only a lightning bolt adorns the front. In line with another logo that Opel used earlier, in which a kind of zeppelin stood in a circle, from the 1960s a circle comes around the lightning bolt. From now on, that will be the Opel logo, albeit in slightly different guises. The latest version is, in full fashion, simple, graphic and two-dimensional, with no shadows, gradients or a brand name on the circle. Sleek, you might say. 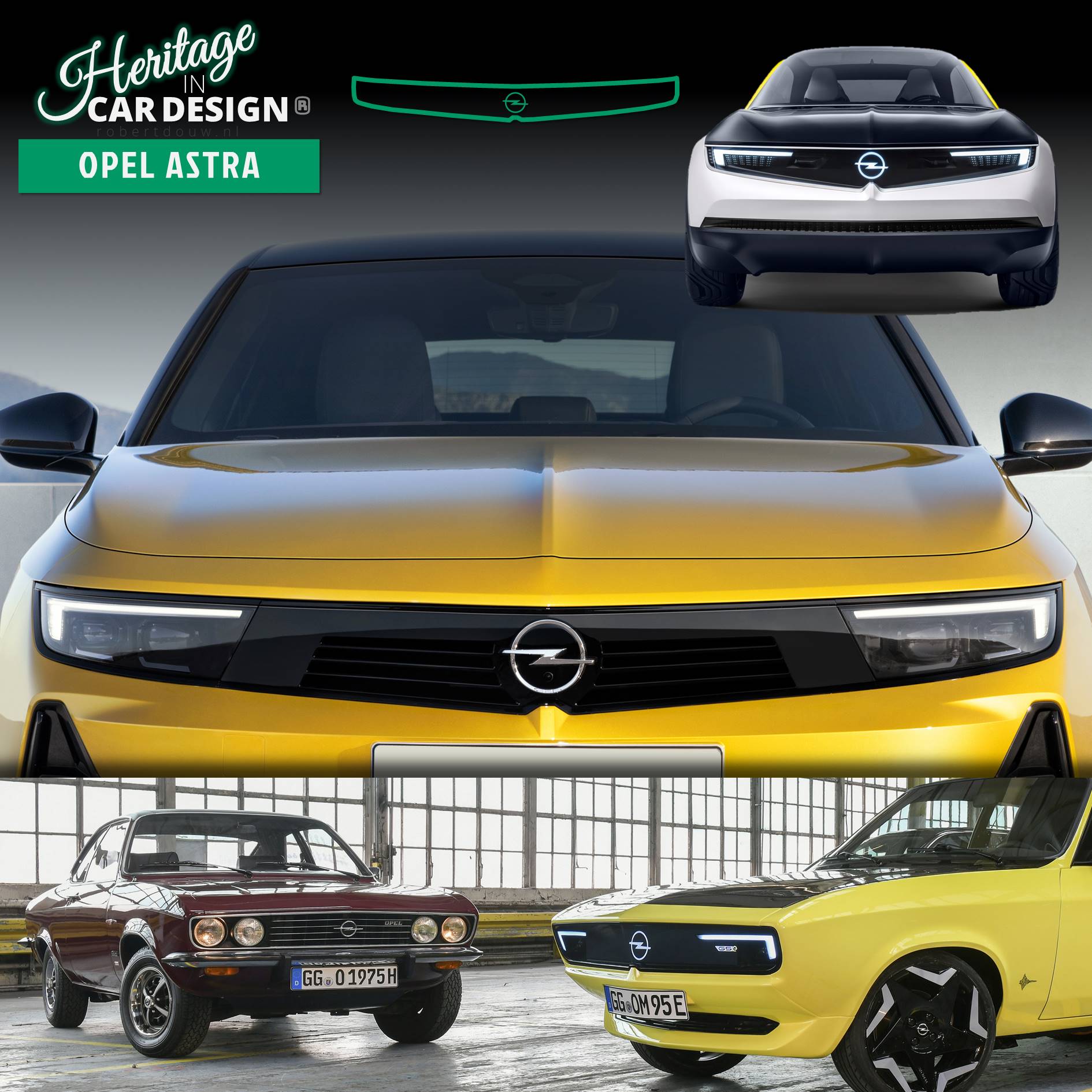 Vizor
As striking as the crease on the bonnet may be, what is even more striking on the front of the new Astra is the part that Opel calls the Vizor, sometimes even fitted with an ®. The visor that the brand refers to is the black surface that optically forms one piece from headlight to headlight. Opel showed this new family face for the first time in 2018, on the Opel GT X Experimental, the forerunner of the new Mokka. However, the idea goes back much further, to the 1970 Manta. On that model, like on other Opels from that period, the headlights were integrated in one optical piece with the grille.

With the ever-increasing electrification in the automotive sector, the grille loses its function in more and more cars – not yet with the Astra, hence the slots in the Vizor – and can become a closed panel. This not only benefits the aerodynamics, but also offers the possibility to place sensors and the like behind it for adaptive cruise control and other systems – the more autonomous the car, the more of such systems it will need.

The bright yellow Manta at the bottom right of the image, by the way, is the Manta GSe Elektromod, a restomod: an old Manta that has been restored and modified. The latter concerns, among other things, the grille, which has made way for a Vizor on which also texts can be displayed. The powertrain of this unique Manta is electric, because that is what this striking car should bring to the attention: new technology and traditional brand values go well together. 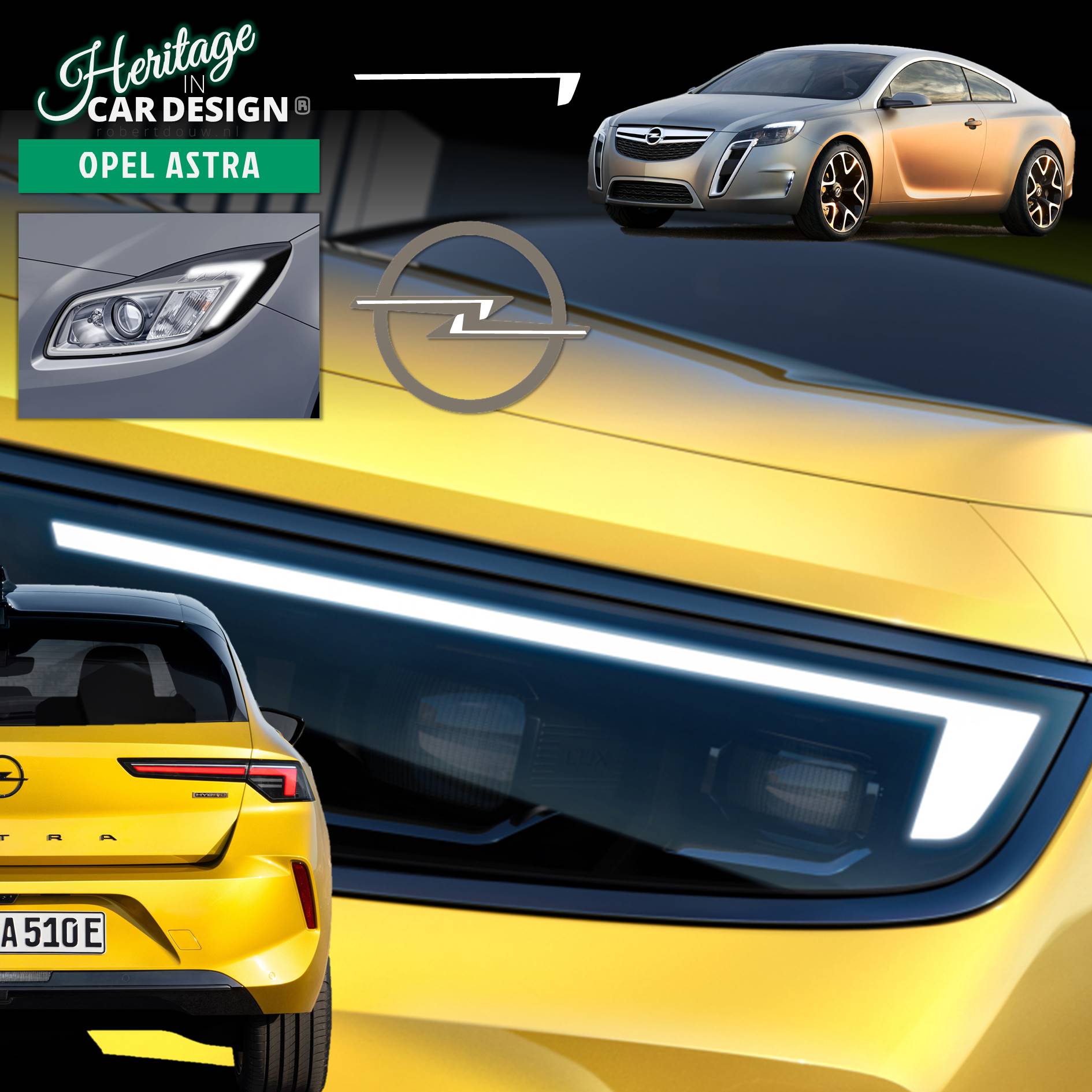 LED signature
Can you call something that has lasted for fourteen years 'heritage'? Maybe not quite yet, but it's starting to look like it. Opel is in any case one of the few brands that has used approximately the same light signature for the daytime running lights for that long. In 2007, the brand showed the GTC Concept, the forerunner of the first generation Insignia. Then the lighting in an "angle" appeared for the first time. On the production model, the horizontal stripe was a bit shorter, but still, the shape was basically the same, up to the latest Opel model, the yellow Astra in the picture. On that car, we even see the same shape in the rear lights.

With a little imagination you can see the light signature as a reference to the lightning bolt in the Opel logo, if you add an extra turned "angle". In all honesty I'm quite sure the designers didn't intend it that way. Not only because they would probably have opted for a sharper angle if they did, but mainly because Opels are not only sold as Opel: in the UK the Astra is sold as Vauxhall, and that brand has a very different logo, a griffin in a circle. By the way, did you know that the name Astra comes from Vauxhall? They already used that name for the model that Opel sold as Kadett. 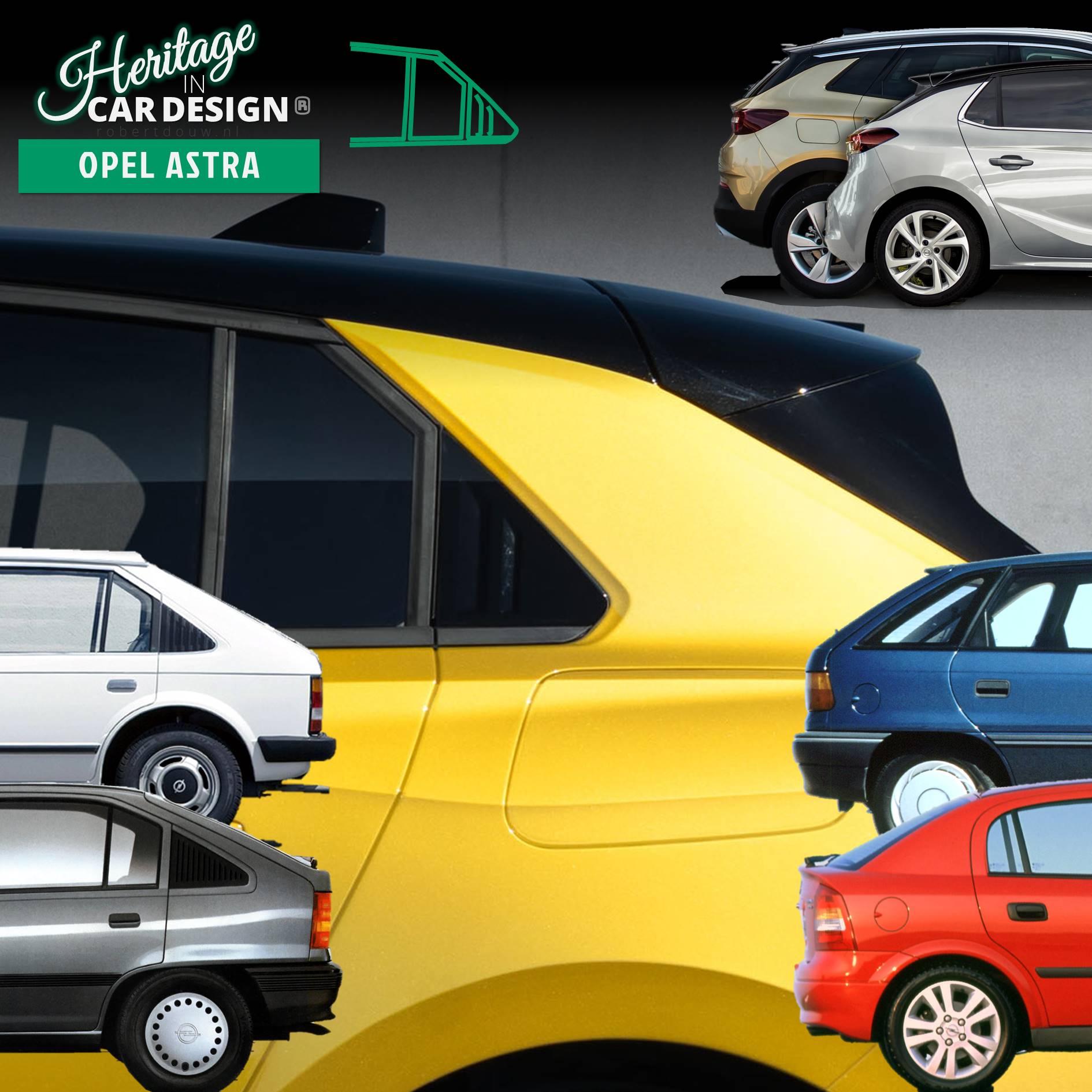 A nod to the Kadett
What undoubtedly falls under the heading of "heritage" and is also intended in that way by the designers of the new Astra, is the shape of the side window in the door to the rear row of seats and the black square behind it. With gills and all, it is directly inspired by the design of the D-Kadett. The Kadett E had something similar. That Kadett was succeeded by the Astra F, but the black "triangle" made way for a third side window. The Astra G also went back to the E-Kadett by imitating the shape of the door, but without a black square or third side window. The Astras after that had a completely different design, up to the latest model, as we've seen. Where the new Astra clearly differs from the D-Kadett is the black roof and the shark fin it creates behind the black surface. Yet that form is not new either; we've seen it before on the Grandland X and the latest Corsa. 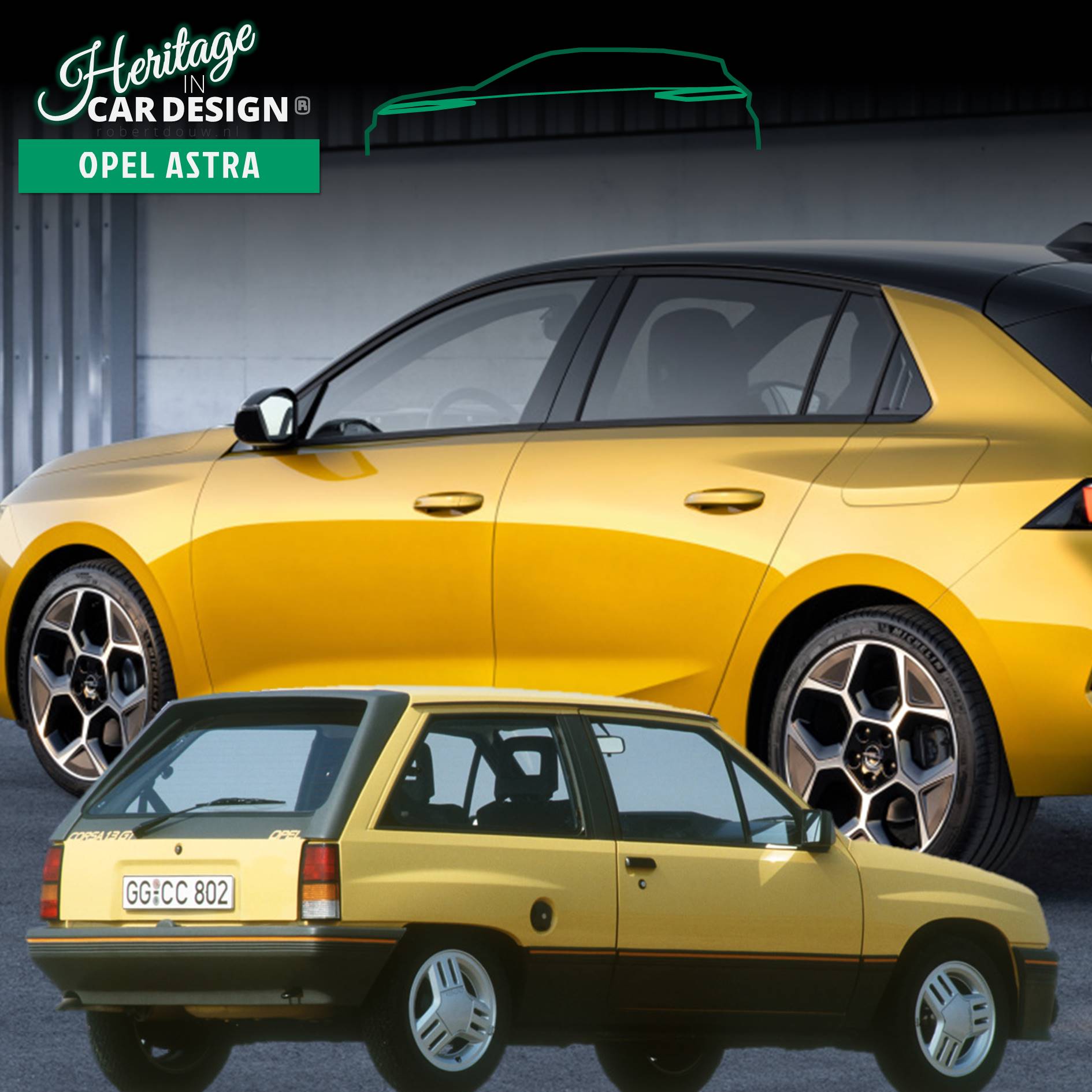 Sharp folds on the flanks
The last element on the new Astra that reminds me of Opels of yesteryear is the sleek, angular design. It takes you back a bit to the 1980s, and in particular to the first Corsa. That model had sharp creases above the wheel arches, as if they had been broadened. I can see that a bit in the creases on the side of the new Astra, although I doubt the designers designed it that way with the Corsa A in mind. Yet, as it is on the picture, in yellow, with that black roof spoiler – the laws of aerodynamics are timeless – the Corsa is quite reminiscent of the Astra. Or actually the other way around. 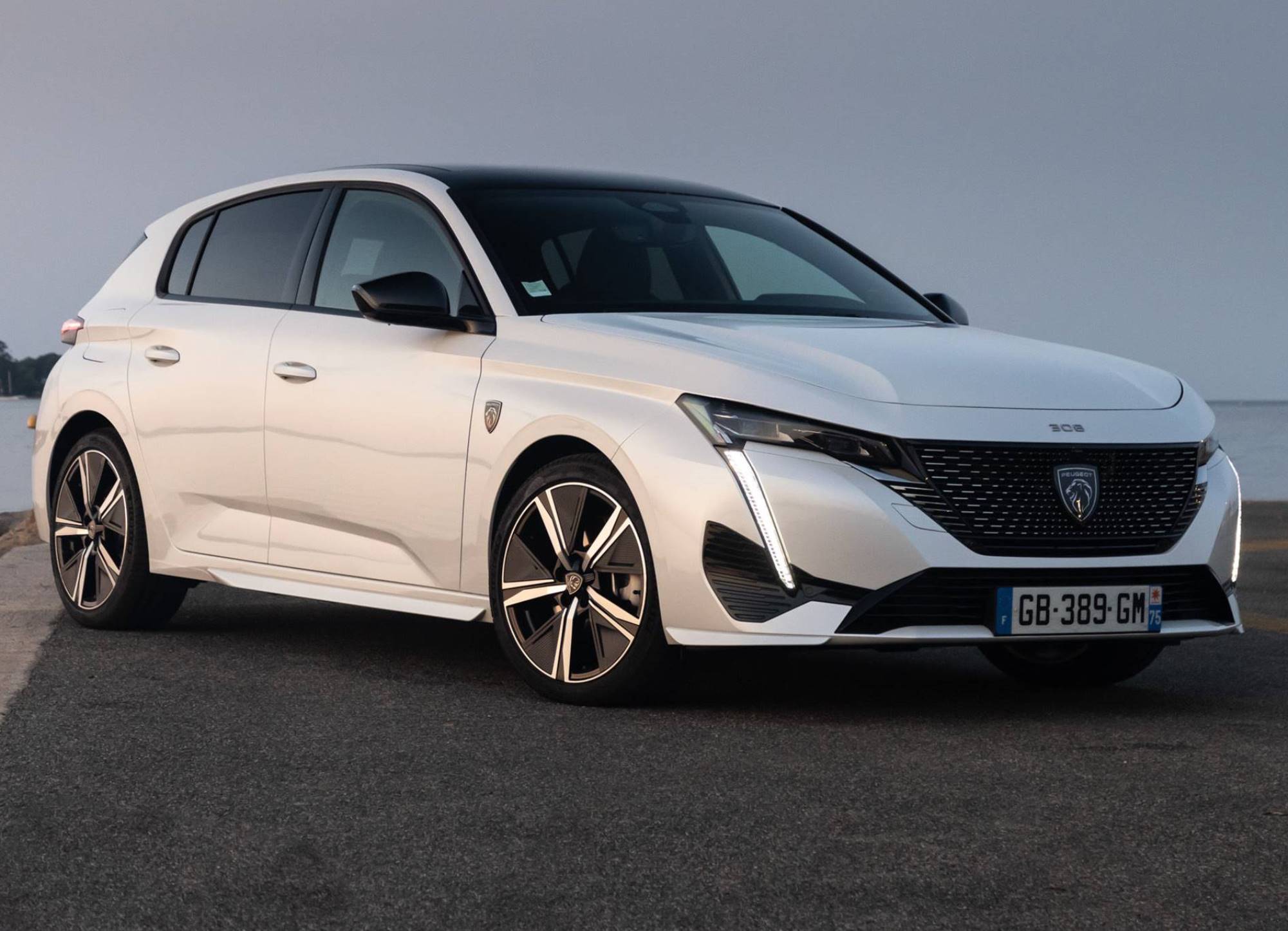 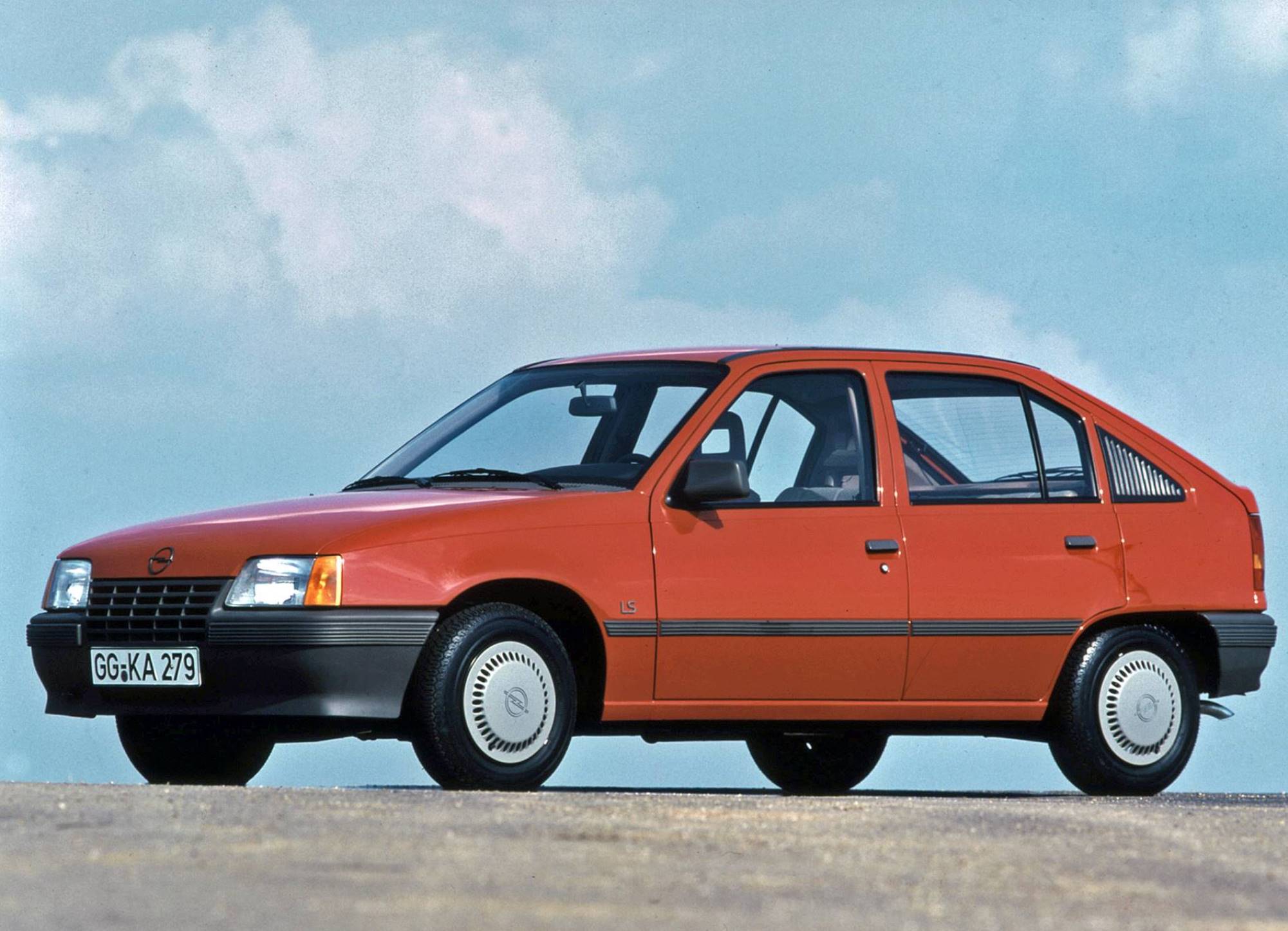 Click here for an overview of everything in the Cars section.