It's 60 years ago this year that the first model of the only truly successful Dutch passenger car brand came onto the market: the Daf 600. A year earlier, that car had attracted huge crowds of people at the AutoRAI (Amsterdam Motor Show), partly due to a groundbreaking piece of in-house developed technology. To celebrate that, I will discuss four of my classics from the Daf factories in four episodes in a row, starting with the Daf 55. 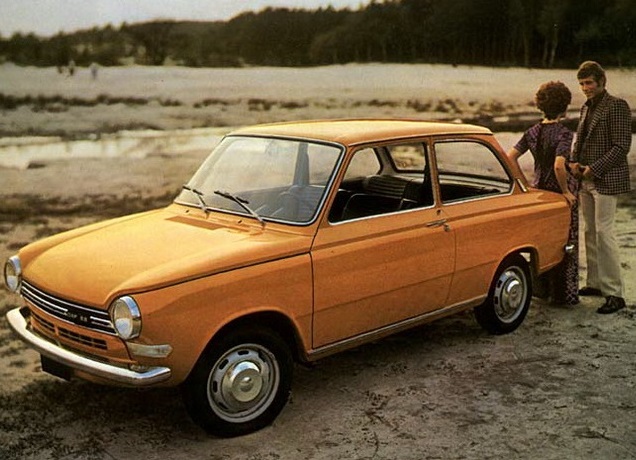 Discovery
I was about 13 years old (1996/1997) when I discovered that a real Dutch passenger car brand had once existed. The village library had the book 80 jaar Nederlandse automobielindustrie (80 years of the Dutch automotive industry), which contained a piece about Daf, but otherwise there was not much information about Daf as a car brand. So the publication of the book Dafjes in 1997 was exactly what I had been waiting for: more information about the rise and fall of that Dutch car brand. That fall happened in 1975, when the Daf passenger car division was sold to Volvo. I will talk about what Volvo did (not) do with it and about Daf's never executed future plans in the next three episodes of this series, but now I go back to the time that Daf was successfully developing as a passenger car brand. 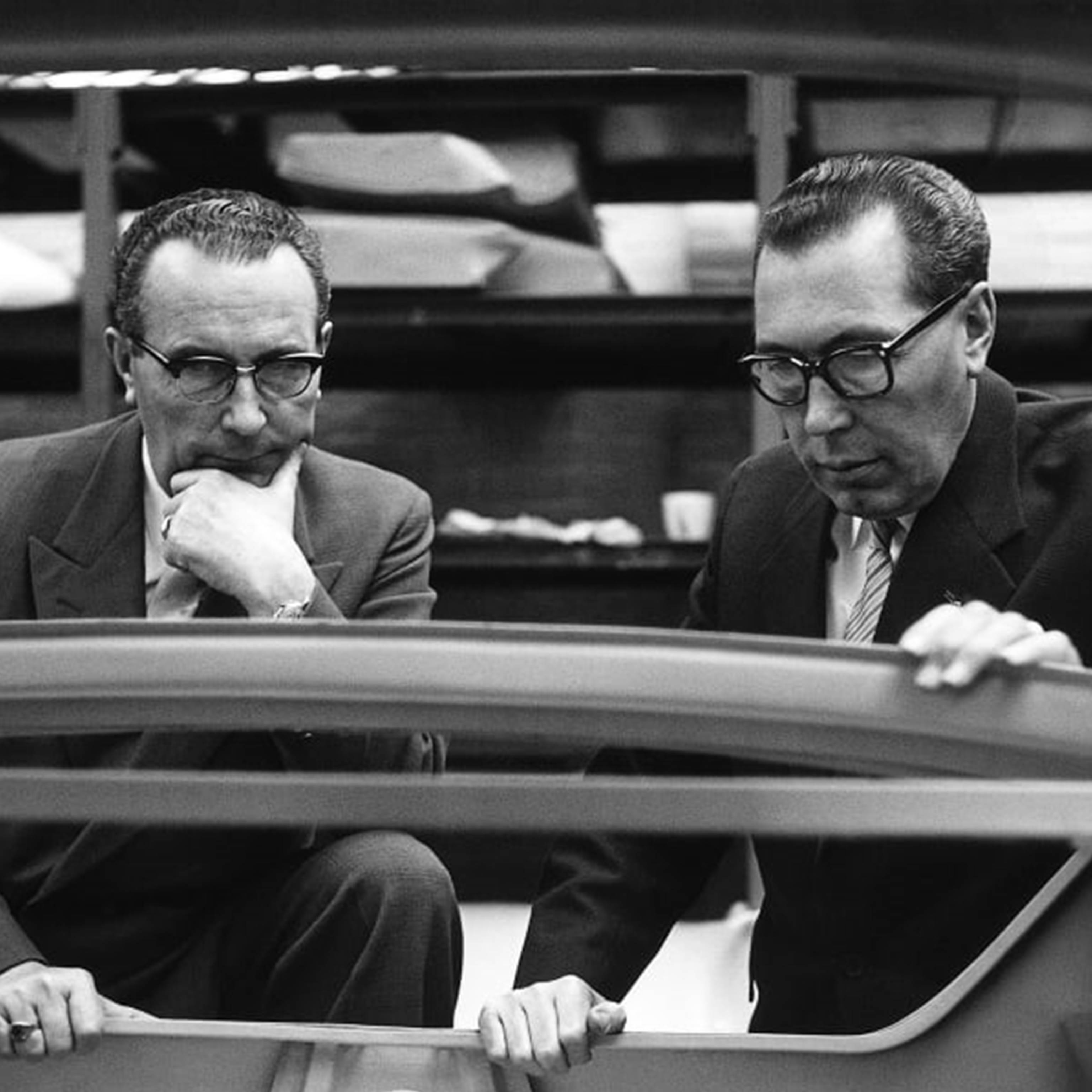 American example
When Daf came to enrich the passenger car market in 1959, the letters in the brand name stood for Van Doorne's Automobielfabriek NV (Van Doorne's Motorcar/Automobile Factory), with Van Doorne being the last name of founder Hub, who ran the company together with his brother Wim. Hub van Doorne enjoyed driving American cars and wanted their first car for the general public to look like that. That's why Willem van den Brink designed the Daf 600 with 'fins' at the back and why the luxury version of that model, with the (somewhat unfortunate chosen) name Daffodil, has a large chromed grille. The car was further developed in the following years, with the help of Michelotti, and this eventually resulted in the Daf 33. 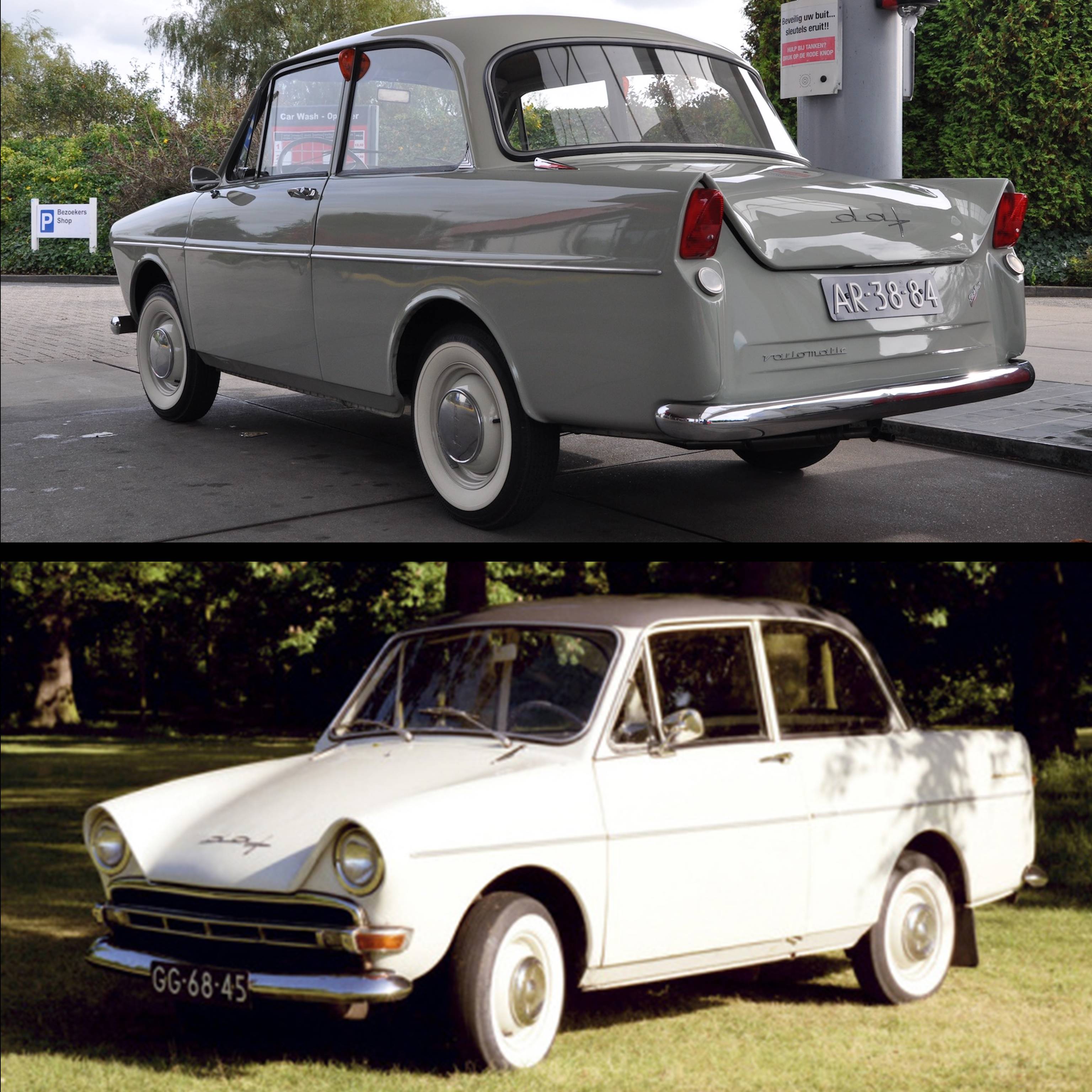 Fins and lots of chrome: Daf 600 and Daffodil

Italian Dutchman
Daf wanted to appeal to more customers, and decided to develop a larger model. That 'larger' is relative, because in terms of external dimensions we would call it at most half a segment higher today, but the model was slightly larger than the 33, so allright then. For that larger model, the 44, the help of the Italian designer Michelotti was called in again. This time he was allowed to do more than trimming an existing model; the 44 is a completely new design by his hand. The car had an engine with 850 cc, which was of course linked to the Variomatic, the continuously variable transmission invented by Hub van Doorne. To attract even more customers, a variant was developed with an 1108 cc Renault engine and some changes to the design of the car, that was called Daf 55. Daf originally wanted to develop a completely new and somewhat larger medium-sized model, but when that turned out to be too expensive, they opted for an 'upgrade' of the 44 into the 55. 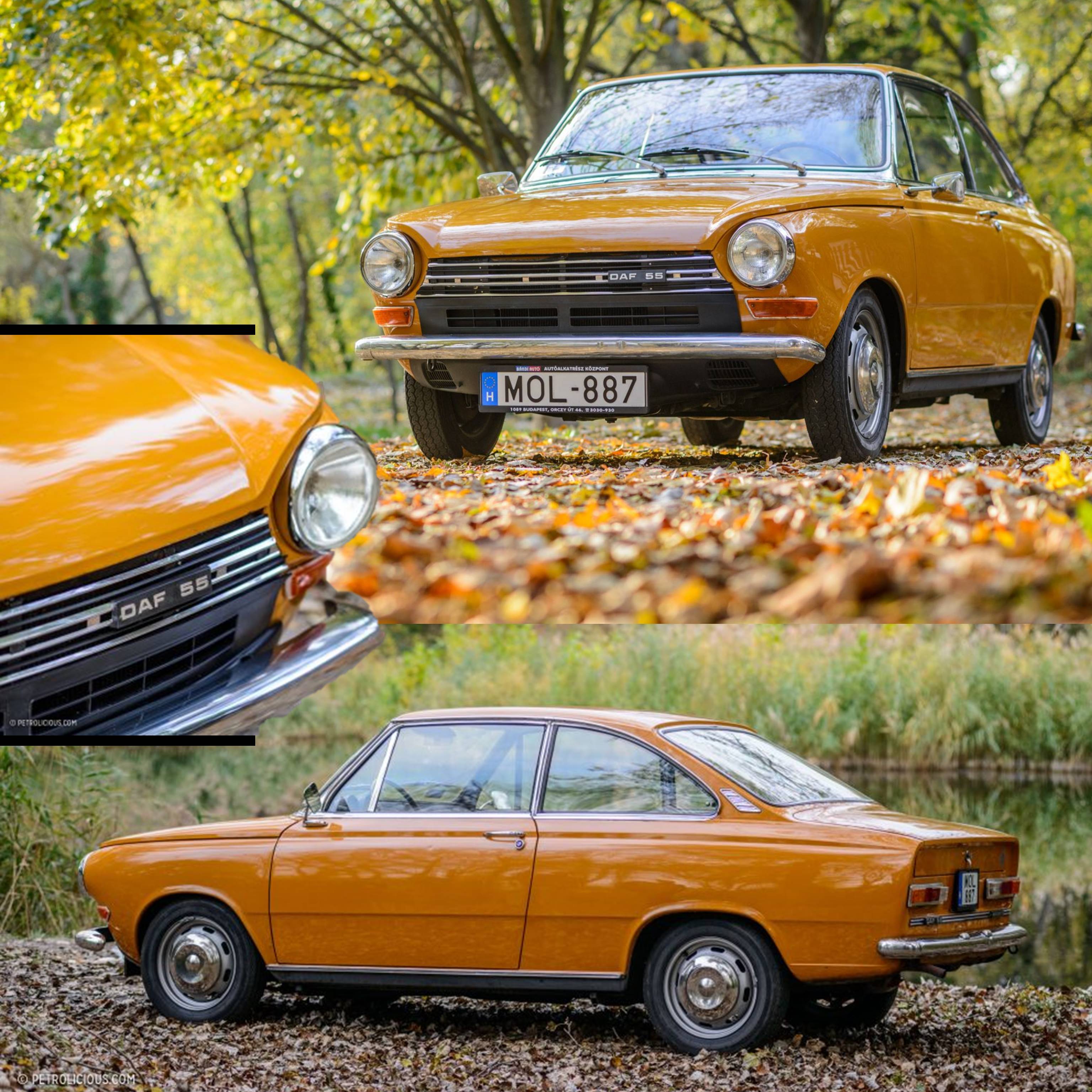 The master's own style
Of all the models Daf has built, I think the 55 is the most beautiful, and of the 55-range the Coupé in particular. Therefore I chose that as the subject of an intaglio I had to make for the exam subject drawing (you cab see the result at the bottom of this page). Giovanni Michelotti is not just any designer. Wikipedia calls him (in different languages) "one of the leading designers of cars in the 20th century." In the 1950s he was responsible for all models of the British car maker Triumph. When putting a number of models he designed next to each other, there are some similarities that hint to the master's own style. 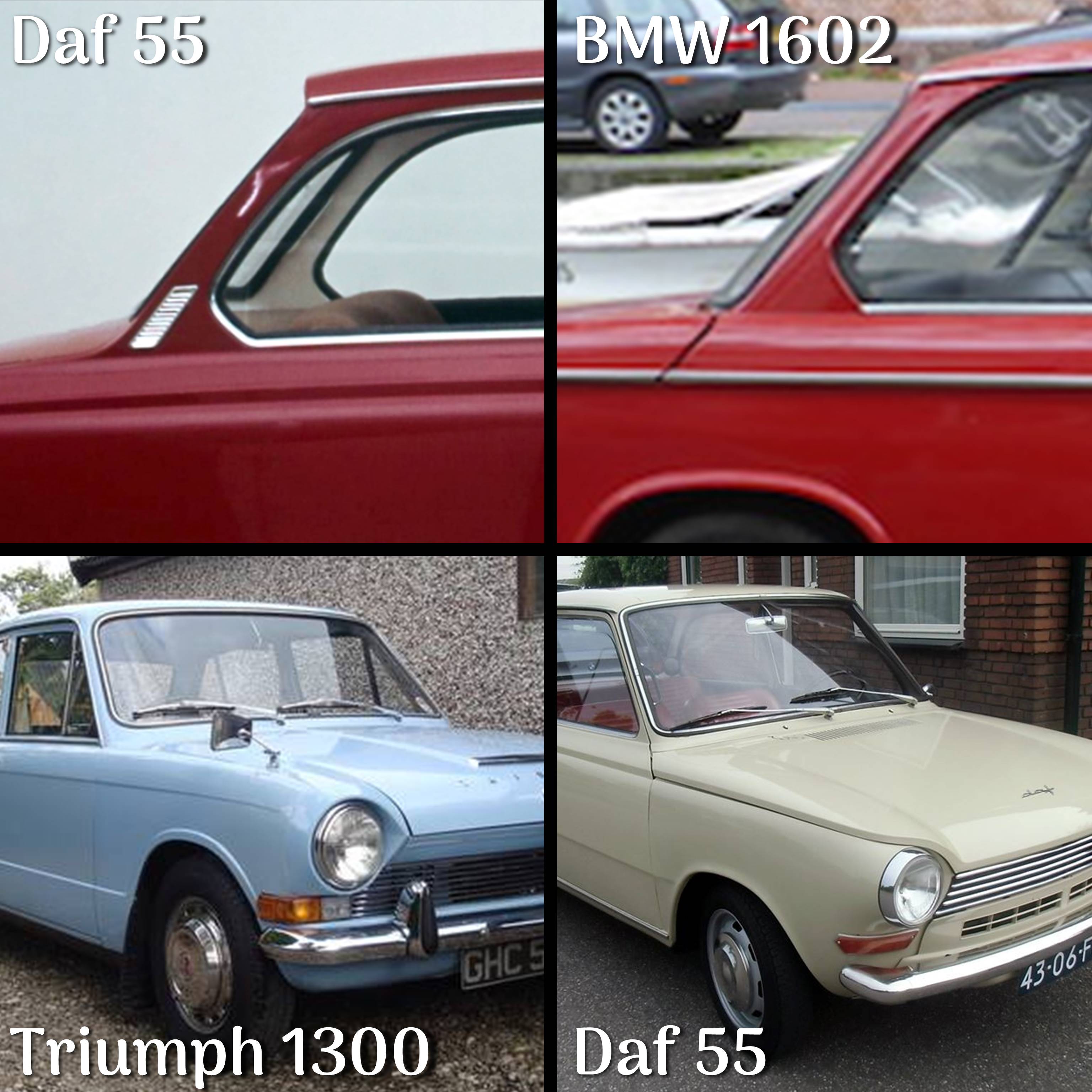 Its own special character
Michelotti's impressive portfolio will undoubtedly have played a role in Daf's decision to take their chance with him. In addition, it's almost inevitable that the Van Doorne gentlemen had noticed that the style of Michelotti on the BMW 700 LS was very compatible with their own 600, 750 and Daffodil, which were the precursors of the 33, like I said before. I have to admit that I'm speculating a bit now, but if you only take a look at the pictures below... Let's just say Michelotti's linings fit in with the preferences of the Van Doornes. Anyway, the 44 and 55 did get a more modern design than the aforementioned triplets. For me, that's another characteristic of a master designer: each model has its own looks, but in the style of the designer. 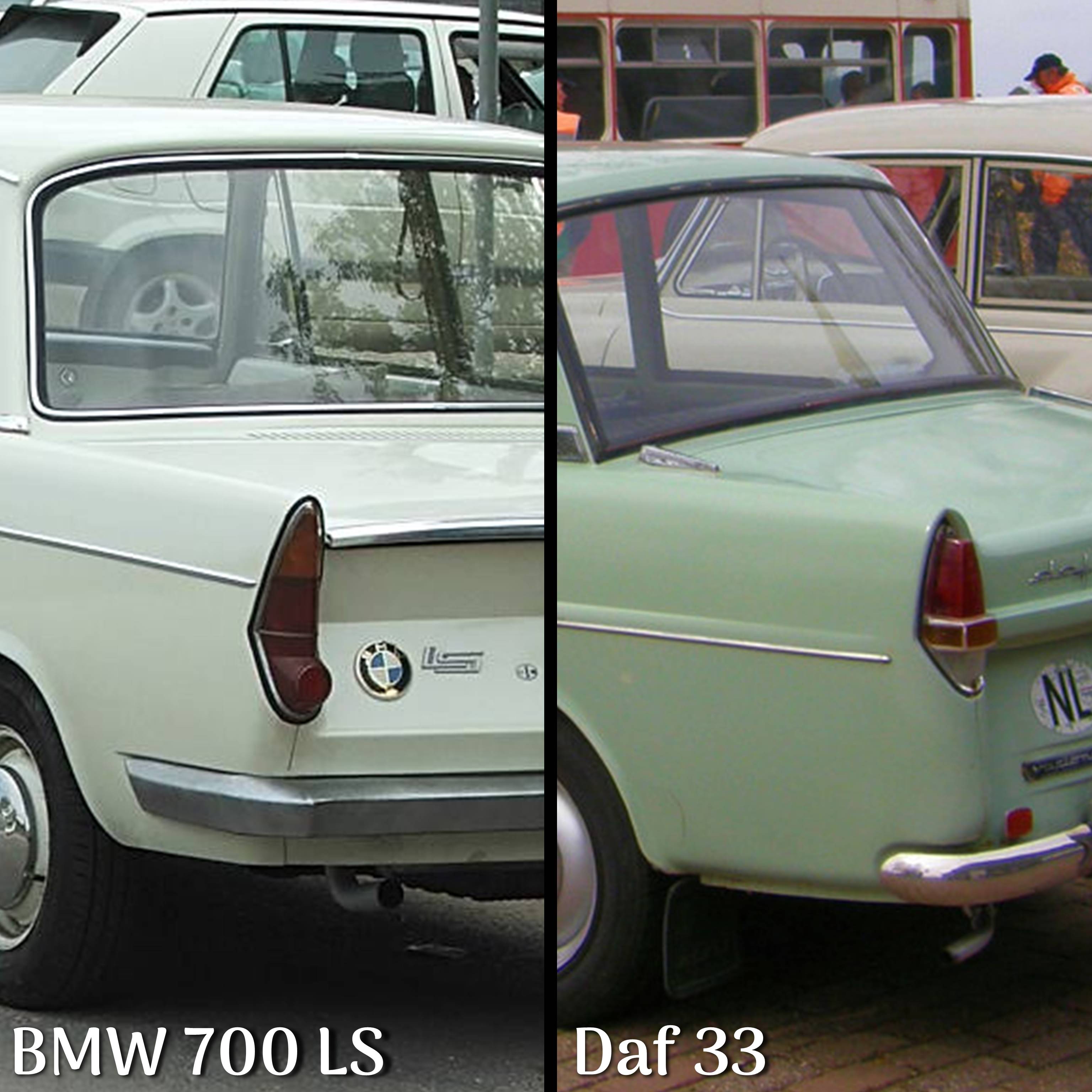 Assertive, not aggressive
One of the nicest details in the design of the 55, I think, is the line that runs from above the grille over the headlights to the flanks. That line not only gives the 55 a recognizable appearance, but also gives the car an assertive look, without it becoming aggressive. Michelotti had already applied the same line to the 44, but in combination with the solid front it doesn't come out as much. If you want to compare the models in real life (or if you're just interested in a piece of Dutch cultural heritage full of groundbreaking inventiveness), then a visit to the Daf Museum in Eindhoven definitely is a must! 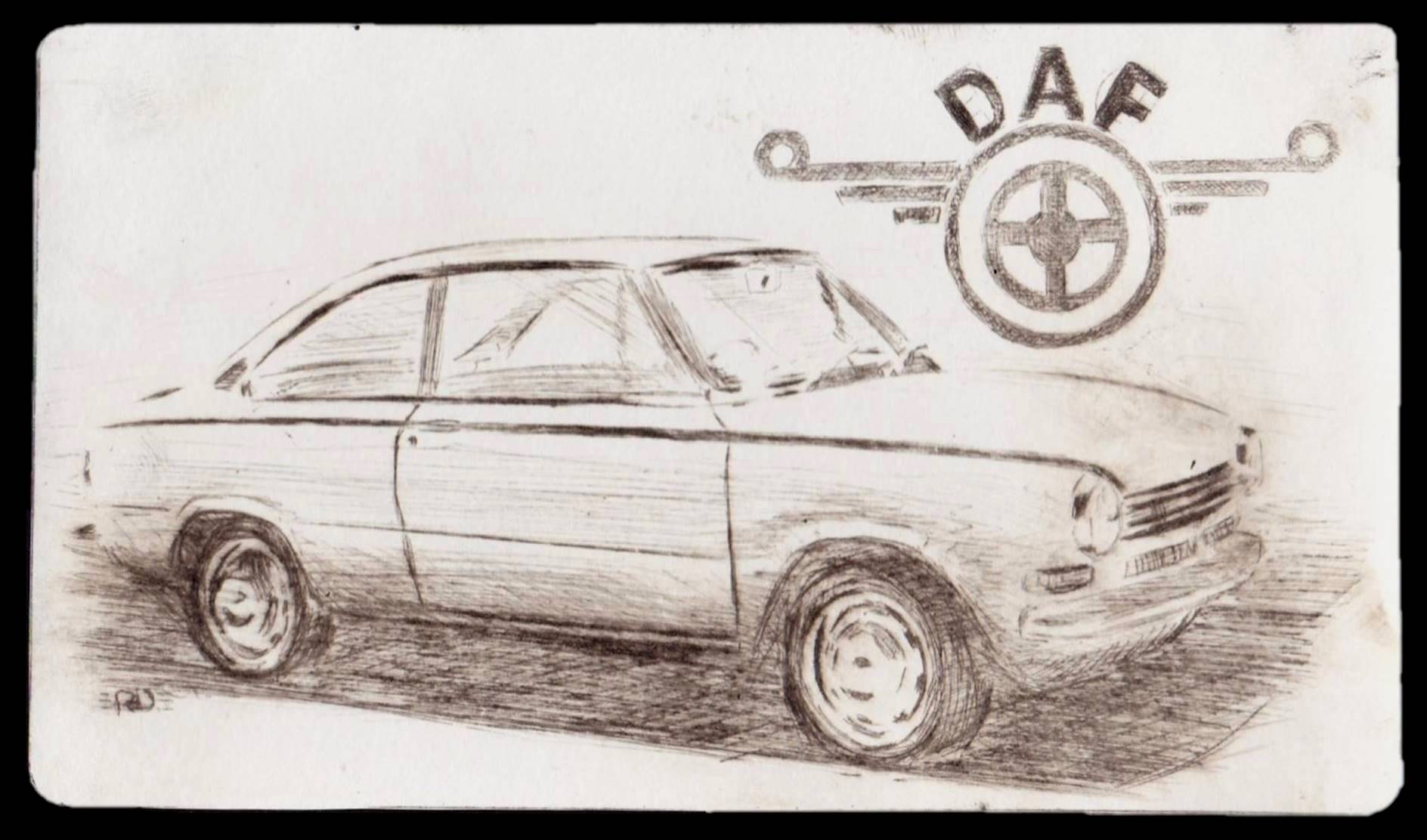 MY CLASSICS
In the My classics section, I regularly add a model to my digital collection of classics. For that, I select cars whose design appeals to me or evokes memories. So nostalgia, and very subjective. Hence the section title: my classics.
In the next episode: the future that appeared to be too expensive...