Rome… If you want to get saturated with visual art and (other) culture, that's of course one of the ultimate places in Europe. And saturated I was, when we arrived at Piazza del Popolo on the sixth day of our Florence and Rome trip in 2019. When, after some searching, in the rain, with the next day's return trip already in mind, we found the entrance to the Chiesa di Santa Maria del Popolo, we had already seen so much – from the Colosseum to the work of Jackson Pollock – that I was pretty satiated. We were there to see two Caravaggio's, but I wasn't expecting that much of it anymore; when you're saturated, even the greatest masterpieces lose their impact. Or don't they? 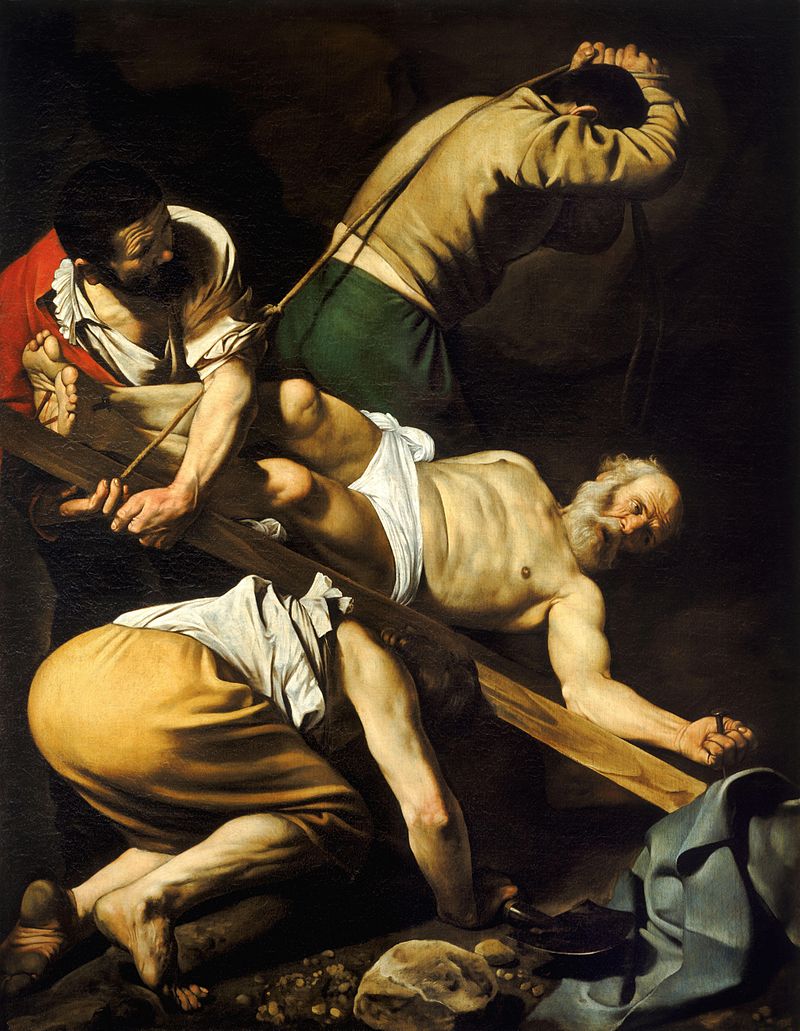 Two rivals in one chapel
As you enter the Santa Maria del Popolo, you look out over a wide aisle that continues to the altar, which was partly in scaffolding when we visited. There are pews on either side of the aisle and next to that you can see large pillars on the left and right. Behind those columns are chapels, a kind of niches that once belonged to wealthy families. One of those prosperous people was Monsignor Tiberio Cerasi, who commissioned the two most successful visual artists in Rome at the time, to create works for his newly acquired chapel. These two artists are sometimes seen as rivals, or as the representatives of two directions in the Baroque. Cerasi commissioned the altarpiece to 'idealist' Annibale Carracci, for the two side panels he asked 'naturalist' Caravaggio. Both artists had recently proven to be masters of their craft in other churches.

A completely different time
In our time, when you walk into such a basilica with works from the 17th century, it's good to realize that we now live in a completely different time. Back then, traveling took much longer, telephony and internet did not exist, of course, and partly as a result of that, developments went much slower. Despite this, it was a turbulent time: in the 16th century, the church, which at that time still had a major impact on daily life, had experienced the first major division in the form of the Reformation, on which the Roman Catholic Church brought the Catholic Reformation or Counter-Reformation in action. The (Roman) Inquisition was in full swing, so dissent could result in the stake, for example. Social security did not exist, the differences between rich and poor were large. The Thirty Years' War raged in large parts of Europe, East India Companies were founded in England and the Netherlands. Gravity had just been discovered, but it was not until 1672 that Isaac Newton published the law of gravity, as well as his analysis of sunlight in spectral colors. But by then Caravaggio had died 62 years ago, probably by murder or manslaughter.

No lofty life
Caravaggio was born as Michelangelo Merisi in 1571, probably in the village of Caravaggio. His father died of the plague, and the boy was brought up in poverty by his mother, along with the four other children. As a young adult, Caravaggio was by no means a saint; he drank a lot, fought often, and at one point even had to flee Rome after being found guilty of murder and essentially outlawed. The fact that he was commissioned as an artist and that he was released on bail a few times was largely due to men of power who protected him. In his art he was also a troublemaker. He used models of the street and depicted the figures in his paintings in such a way that almost every work caused a scandal. Again, it was a completely different time. Within art, which was often commissioned by the Church, rules applied; everything that was divine also had to be portrayed exalted. A mischievous smile could be a step too far; according to rumors, Caravaggio had a prostitute as a model for the Blessed Virgin Mary... 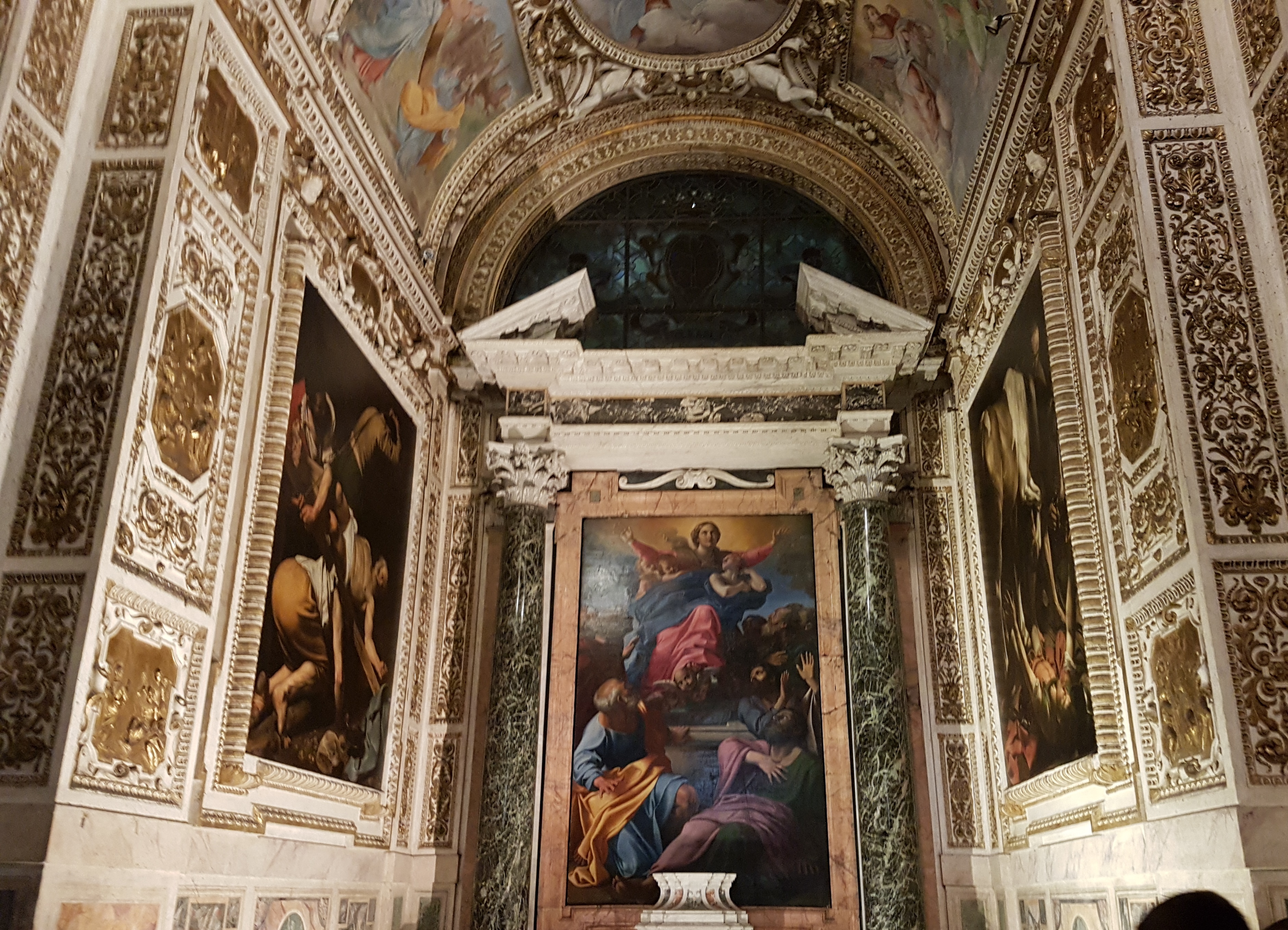 The Cerasi Chapel in the Santa Maria del Popolo, Rome

Cerasi Chapel
Despite everything, Caravaggio was commissioned to make two paintings for the Cerasi Chapel in 1601. 418 years after he hung his canvases there (the assignment was to paint panels, but then it's Caravaggio…) I stood in the same place. If you stand right in front of the chapel, you come face to face with the painting Assumption of the Virgin (1600-1601) by Carracci, the altarpiece. On the 'side walls' to the left and right of it hang Crucifixion of Saint Peter (1601) and The Conversion of Saint Paul (1601) painted by Caravaggio. After a quick glance at the altarpiece, I first looked to the left (Peter) for a while, then to the right (Paul) for a while, and then stood within millimeters of the right wall to observeCrucifixion of Saint Peter closely. No matter how saturated I was at that point on our cultural trip, no matter how many impressive paintings by great masters I had already seen in recent days, this canvas grabbed my attention and took me out of everyday reality for a moment.

Head held high
Crucifixion of Saint Peter is an oppressive painting. It shows an old man in the process of his martyrdom, and there is no way around it. Caravaggio didn't sugarcoat it. Peter is an ordinary man with human emotions. The three figures trying put the cross upright are also ordinary men, anonymous, and busy with their task. The man at the bottom left of the painting is sitting with his buttocks towards the viewer and has mud on his feet. The background is dark, no surroundings can be seen. This contrasts strongly with the figures, and of course especially with the figure of Peter. This extreme light-dark contrast, the chiaroscuro, is what Caravaggio is famous for, and rightly so, because he knows how to use it flawlessly to tell his story visually.

Contrary to common practice and to what was seen as 'the right way', Caravaggio did not sketch. There's also an earlier, disapproved version of The Conversion of Paul, but as far as is known Caravaggio has put Crucifixion of Saint Peter to the canvas in one go. That makes it even more clever that the composition of this work is so perfectly balanced and at the same time very well thought out; for the contrast of light and dark is not the only thing that directs your gaze in the direction of Peter's raised head. Almost all diagonals direct your eyes in that direction (see the image below). These diagonals also create dynamics in the painting, it is a moment of action, the cross is moving, people are alive. And although gravity was not a widely known concept at the time, Caravaggio shows it very convincingly here: even only when you look at it do you feel all the weight of the cross, and most of the weight is clearly in the hands of the man at the top left. 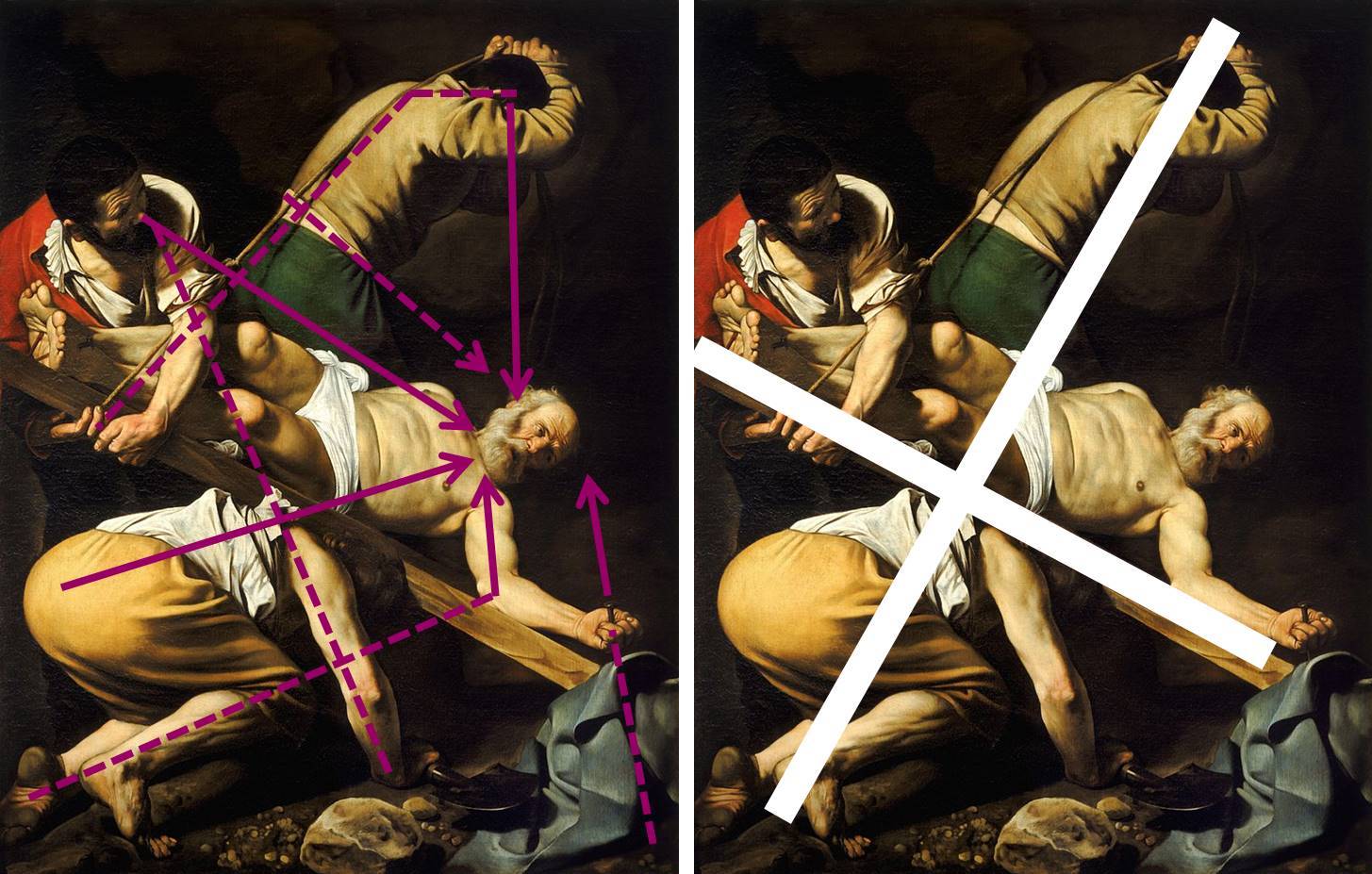 Sober, but with symbolism
Caravaggio's two canvases are completely different from the altarpiece in between. That painting by Carracci fits perfectly with the Roman Catholic ideology of that time: exalted figures, painted in an opulent style, with a typical Catholic theme – the worship of the Virgin is a tradition that originated in the time after the Bible and therefore doesn't occur in Protestantism. When it comes to the depiction, the works of Caravaggio, Crucifixion of Saint Peter most of all, are very down-to-earth, almost literally. Yet there is indeed symbolism in it. The figures and the beam of the cross in Crucifixion of Saint Peter together form an inverted cross, like the one that Peter is nailed to. The image of a man on a cross, wearing only a loincloth, naturally refers to the countless images of the crucified Jesus. Tradition has it that Peter wanted to be crucified upside down because he did not consider himself worthy to die in the same way as Christ. The crucifixion of Peter – if it indeed happened that way – wasn't something lofty, and so Caravaggio didn't portray it that way. It did not enhance his popularity in the Rome of his day. That doesn't really surprise me; to me, the painting comes across as a fairly Protestant image, although Caravaggio probably hasn't seen or intended it that way.

PS On this Reformation Day* I think it would be nice to conclude with a final symbol from the work of Caravaggio: in the foreground is a piece of rock. Peter was originally called Simon and was given the name Peter by Jesus, which means 'rock': "you are the rock on which I build my church." Church. Singular.

*Luther did not intend to divide the church, but called for reform within the Catholic Church.
By the way, Luther visited Rome in 1511. During his visit, he stayed in the monastery that is located right next to Santa Maria del Popolo.