On March 2nd will be announced which car may call itself the Car of the Year 2020. In this mini series I count down to that moment, by discussing one of the seven nominees every day. I try to estimate the odds of every contender and put the model and brand in a historical perspective. With one day left, today it's the turn of the Toyota Corolla. 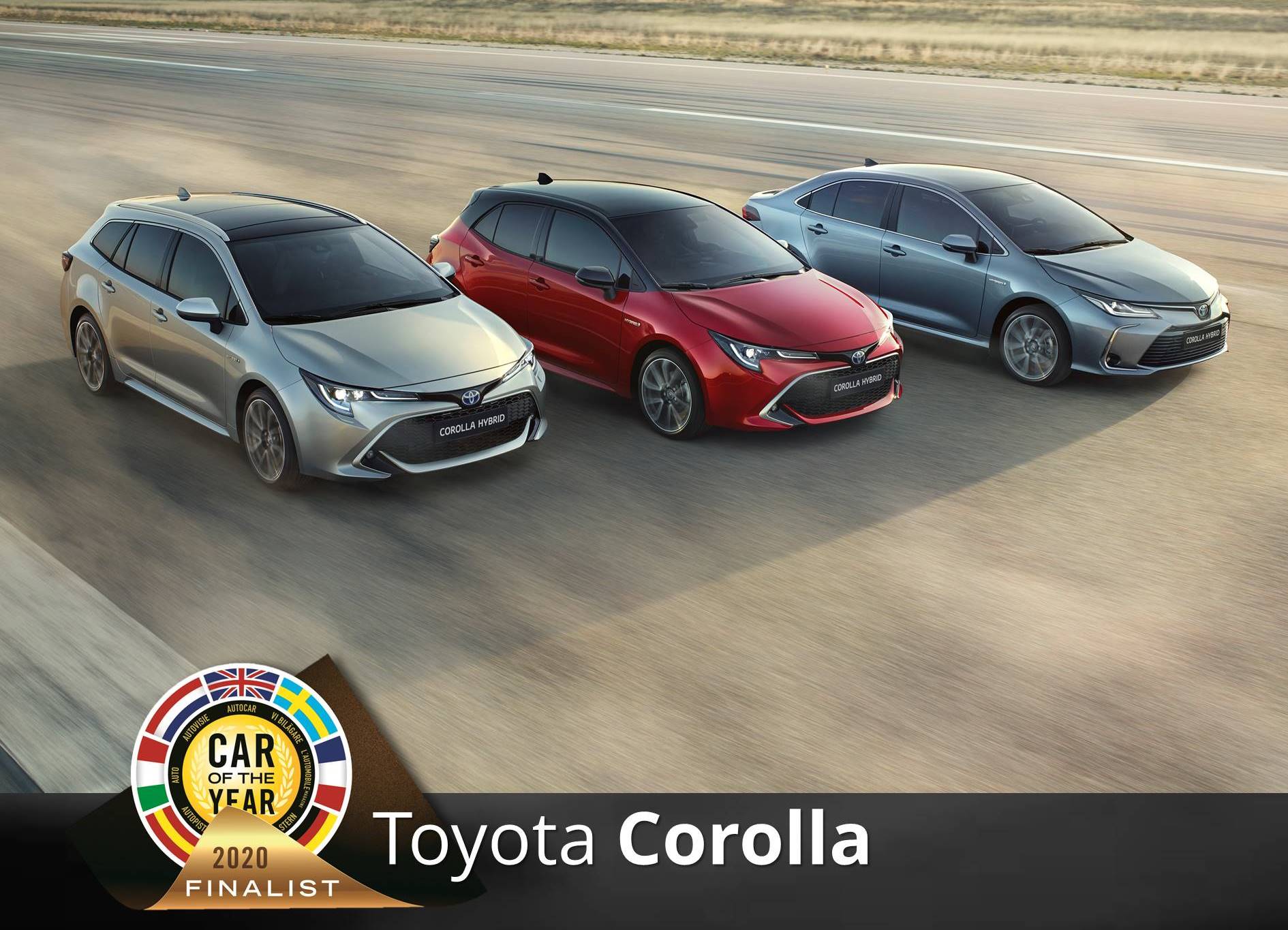 Front view of the Toyota Corolla, as Touring Sports, hatchback and Sedan

Toyota and the Car of the Year election
As I wrote a few days ago, the European Car of the Year election is predominantly a European affair, judged by the winners. Only in 1993 did the title go to a Japanese brand for the first time, when Nissan won with the Micra. Yet Toyota has achieved the top 3 five times. In 2001 the Prius became third, in 2010 the iQ came in second and the GT86 – together with twin brother Subaru BRZ – accomplished the same in 2013. Toyota had their first win in 2000 with the Yaris, and in 2005 the Prius got to show off with that title. Would the Corolla reach the top three for the first time this year, and perhaps even claim the third victory for Toyota?

The pedigree of the Corolla
Of all nominees for the title Car of the Year 2020, the Corolla is the model with the oldest name. The first generation Corolla dates from 1966. Since then, Toyota has always had one or more models on offer under that name: hatchbacks, liftbacks, sedans, station wagons and coupés. The first generation was followed by the second in 1971, the third in 1975, the fourth in 1979, the fifth in 1983, the sixth in 1988, the seventh in 1992, the eighth in 1997, the ninth in 2002, the tenth in 2007, the eleventh in 2013 and therefore the twelfth generation in 2019. From 2003 to 2018 the hatchbacks and, from 2013, also the wagon (in the Netherlands, and I think throughout Europe) were sold under the name Auris. The sedan kept the Corolla nameplate, but was not offered in all countries. For the newest generation, Toyota has set the name Auris aside, and so the hatchback, Sedan and Touring Sports are all called Corolla again.

The odds of the Corolla
Of all the Corolla's that have been, I think the new one has by far turned out the best. And then I'm only yet talking about what the car looks like. If what I found on YouTube is to be believed, the car drives well too. I quote: "comfortable with a dynamic edge". With the hybrid versions the consumption is favourable. Furthermore, the car has many standard active safety systems and also in general a rich standard equipment. It is an 'offer that you cannot ignore' and a 'Japanese you no longer buy only with your head'. Here also there are of course disadvantages: there is little legroom in the back (especially with the hatchback, which has a wheelbase that is 6 cm shorter than on the Sedan and Touring Sports), limited luggage space and the infotainment system hasn't kept up with the competition.

Will the Corolla be the Car of the Year 2020?
Statistically, Japanese cars are less likely to win this election, but on the other hand, cars from the C segment often do well. In addition, the Corolla – the best-selling car in the world – has become even better than it already was. Nevertheless, the car doesn't seem to excel in anything. My gut tells me: good car, but no title for Toyota, this year.

Tomorrow the winner will be announced. How right was I? And above all… what car has won?