Two functional black steel constructions with in between, over a length of 10 meters, two pairs of elastic bands hanging just not tight, each connected to an engine on the left side. From those engines cables run to a semi-concealed laptop. A black cloth against the back wall, not super tight. The floor also black. An emergency stop on that floor. An old mantelpiece against the left wall, simply because it was already there. In any case, the aesthetics of this work of art are not in the installation, the technology may be seen. This technology, in combination with those very long elastics, is of course also what causes the anticipation, and perhaps as well a mild fear: what will happen to those elastics when the engines start running? 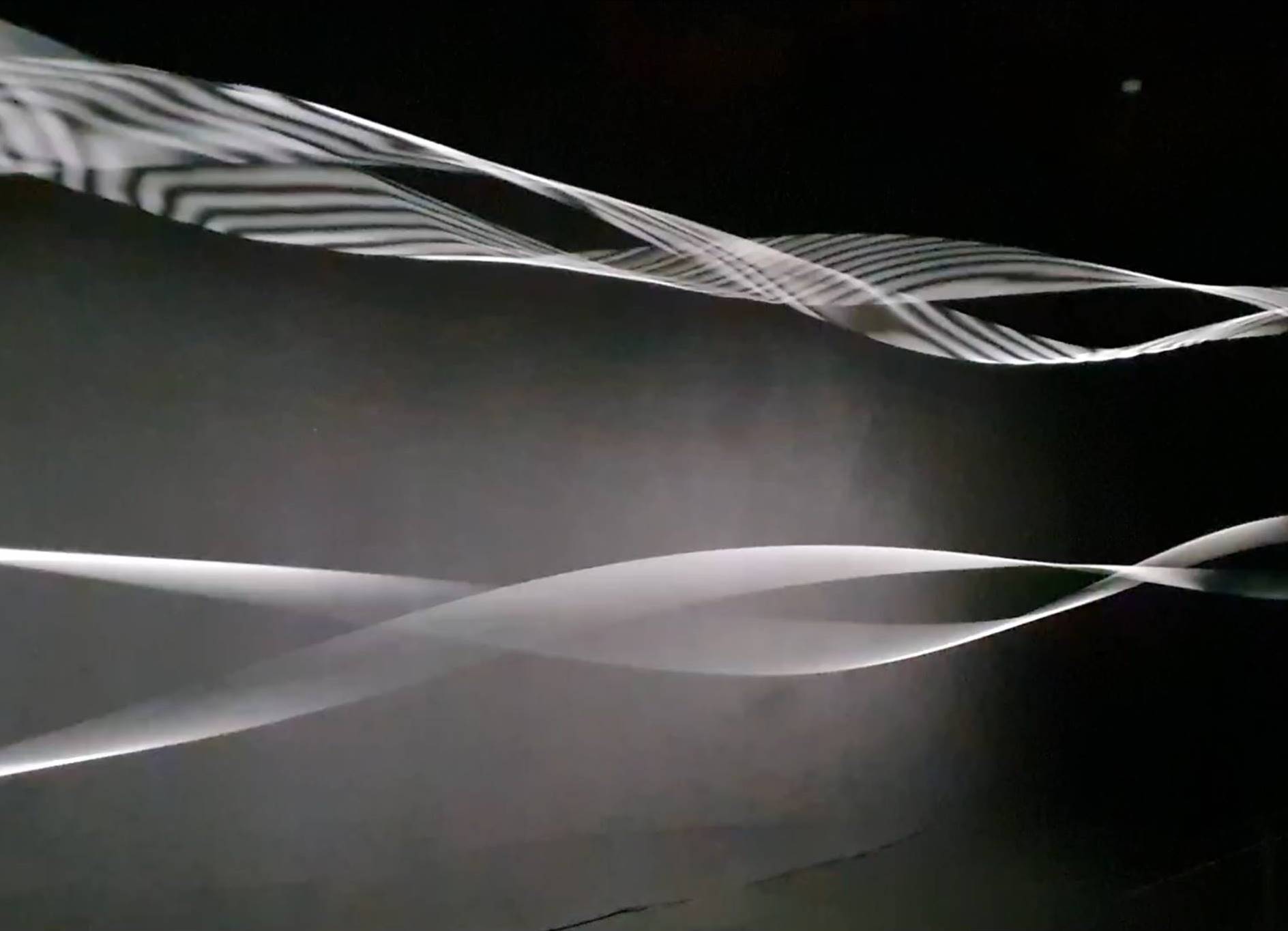 Sound & vision
It takes a few minutes for something to happen. Then there's a slight electric buzz and the engines turn slowly left and right a few times, as if they are warming up. That takes a while. Then the speed of rotation is increased and a sound is created that is comparable to that of a skipping rope turned round fanatically, supplemented by the sound of the engines. Judging from the title of the work, 10 Meters Of Sound, that sound should affect me, but as far as I'm concerned the fascination is mainly in the patterns that the fast spinning elastics make against the black background. If you watch the video below, you will see what I mean. The patterns you see in the video were not created by filming; it reflects exactly what I saw in real life. Fascinating. Two rooms later I made a note on my phone: “afterwards inclination to applaud”. Because it felt like I had been watching a performance.

Hengelo, 1986
"The meaning of the works of art is not so much determined by the objects themselves, as by their perceptual psychological effect on the viewer." This quote from De tweede helft1 ("The second half") could be about 10 Meters Of Sound. However, it comes from the chapter on the 1960s. Prior to the quotation, all kinds of then new art forms are mentioned: op art (optical art, which made extensive use of optical illusions), light art and kinetic art (kinetic = movement), all of which made "abundant" use of technical means. Almost all those labels can also be stuck on 10 Meters Of Sound. You could also see it as an installation (might that mantelpiece be a conscious choice?) And it also has the characteristics of a performance, just not performed by a human. At first glance I thought I was faced with a work by an artist who would have been born around 1930, with the peak of his career in the 1960s. It turned out to be an artist who is even a few years younger than me: Philip Vermeulen, born in 1986 in Hengelo.

Hypersculptures
That I thought to be dealing with a work from the 1960s when I saw 10 Meters Of Sound is not surprising, judging by Vermeulen's website2: “Philip's work continuous a lineage of experimental art from the Zero art movement, sound art, kinetic sculptures, and audiovisual arts. He creates what he calls 'hypersculptures', kinetic sculptures that move at such a high speed that they change our perception of the physical properties of these materials.” An interesting premise, which clearly applies to 10 Meters Of Sound and which ensured that I kept looking mesmerized at those revolving elastics for the entire run, precisely because you soon no longer see rotating elastics, but a spectacle of moving stereometric shapes.

Details of 10 Meters Of Sound

Picnic in 2420?
Such a contemporary work of art differs – apart from the fact that many people, when it comes to visual art, think of paintings, which this 'hypersculpture' clearly isn't – in an important point from the work of an old master like Caravaggio or even already of Mondrian's work, because you do not yet know what place it will get in art history. Perhaps it says something very cautiously about the art of the 60s and 70s and its sustainability, although those are also very recent in the whole of art history, but whether in four centuries there still will be people be looking at 10 Meters Of Sound and how they then perceive the work, is of course impossible to say. On the other hand, the fascination for technology and machines goes back at least five centuries, as Leonardo Da Vinci shows. And in the end it mainly depends on the spectators what they see in a work of art. In the words of1 François Morellet (1926), one of the artists of whom Vermeulen chose a work to hang in Rijksmuseum Twenthe opposite 10 Meters Of Sound: "Art is like a picnic: one eats what one has brought themselves".


Images: Own pictures and video.