When I first heard the word sûpengroattenbrij, I immediately thought it was a nice word. It has a nice meter and it sounds so delightfully Frisian. The word ís Frisian of course, but the dish isn't necessarily. As a child I already knew that under the name gortepap.

Sûpengroattenbrij or karnemelkse gortepap is a porridge made of buttermilk and pearl barley. In my memory we didn't eat gortepap very often, but I do remember that it can be eaten hot or cold and that we often stirred in syrup / treacle or muscovado / brown sugar - I preferred the latter. Nevertheless, I found barley porridge just a bit too sour and slimy; I always preferred semolina or rice porridge. In my mind, as a child, all those traditional porridges seemed to me as the typical food of Overijssel workers, I don't know why. Perhaps because gortepap was used in that area to make kruudmoes, "an old Gelders and Overijssels dish made of barley, buttermilk, bacon, smoked sausage, raisins and lots of fresh herbs" (my younger self says: not recommended). But 'buttermilk barley porridge' turns out not to be that local. 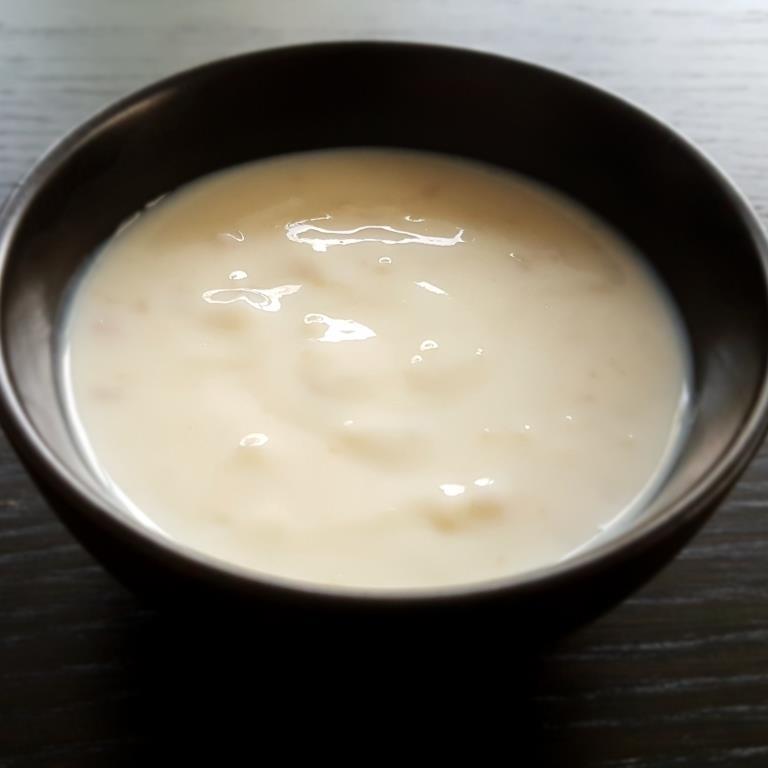 The fact that there is also a Frisian name for that porridge the Dutch call gortepap, indicates that it was also eaten more northerly than Overijssel. In Frisian, as said, it is called
sûpengroattenbrijPronunciation ± 'soup-n-grwatt-n-brey'
. Apart from the fact that I immediately thought that was a funny word, I also wondered what gave them that idea, to come up with such a name. But if you place the word next to its Dutch equivalent, the structure appears to be comparable. In Dutch karnemelkse gortepap is made up of karnemelk (buttermilk), gort (barley) and pap (porridge). The Frisian word contains the same parts: sûpe (buttermilk), grôt (barley) and brij (porridge). When sticking the words together, grôt is transformed into groatten. And the Dutch adjective karnemelkse is embedded in the noun in Frisian.

There is clearly a difference in the origin of the words. Karnemelk is the sour milk that remains after karnen (churning), the "separation of butter from milk". Gekarnde melk (churned milk), so karnemelk - makes sense. However, in sûpe there is nothing like that to be found. In the absence of a 'Frysk Etymologysk Wurdboek' (Frisian Etymological Dictionary) I decided to look up soep (soup) on etymologiebank.nl. That sounds pretty similar and it is also liquid food, so who knows... The 'Etymologisch Woordenboek van het Nederlands' (EWN; Etymological Dictionary of Dutch) calls soep "liquid food" and refers to the word sop. There, reference is made to the relationship with the words soep, sap (juice) and zuipendrinking (a lot), which strengthens my suspicion that I'm right here, because in Frisian soup is sop and 'zuipen' is sûpe.

The EWN tells even more, among other things that Middle Dutch sop(pe) in general means "liquid food" and in particular "liquid (e.g. boiled milk, buttermilk, broth, soup, wine, beer, water) in which bread is crumbled or dipped". Middle Dutch is a precursor to the New Dutch that is spoken in the Netherlands today, and is therefore a bit closer to West Germanic, which is also the origin of Frisian. If you read the meaning after "in particular" you would think that I am already talking about the word part pap or brij, but it is still about karnemelk. On that the general meaning 'liquid food' seems to apply in particular.

Before I continue to the gort and the pap, or the groatten and the brij, I make a short trip to English and German. As far as I can find, all kinds of other barley brews are made in Great Britain and Germany, but they do not know karnemelkse gortepap ('buttermilk barley porridge'). But they know karnemelk. In English, it is called buttermilk and the Germans call the same product Buttermilch. In the Van Dale dictionary reference is made to botermilk at karnemelk, which is called "Belgian Dutch and not general". On the 'Wurdboekportaal' (dicionary portal) of Taalweb Frysk the search term 'bûtermolke' doesn't produce anything, so that word does not seem to exist (until now, maybe, because it's in this sentence...).

In the Online Etymology Dictionary (OED) you will find "1520s" at buttermilk, so the word has been around for quite some time. Which makes it extra surprising that a very different word is used for it in both Dutch and Frisian than in English and German. Although karnmelk is also composed with '-milk' and says something about the process from which the liquid arises. But as buttermilk, Buttermilch and karnemelk all indicate that the product has to do with churning (extracting butter from milk), the word milk ( molke ) is not in Frisian sûpe. So no bûtermolke or tsjernemolke, however all the basic words do exist (tsjernje is churning, tsjerne is the past participle of it). I would expect that the name of the product would have spread with the technique of churning, but apparently things went differently.


WEST GERMANIC
In the West Germanic section every other week I discuss a word that strikes me. I look at the meanings and forms of the word, and especially at where the word originates from. With that I compare the four West Germanic languages Dutch, English, Frisian and German, with the occasional inevitable trip across the fictional West Germanic border.
In the next episode I continue with with the groats...