In my year of birth, design teams in France and Italy started developing the car that became the European Car of the Year in 1988, with the highest number of points ever. By the time I found out about that, I already had many other memories of that model, the Peugeot 405. 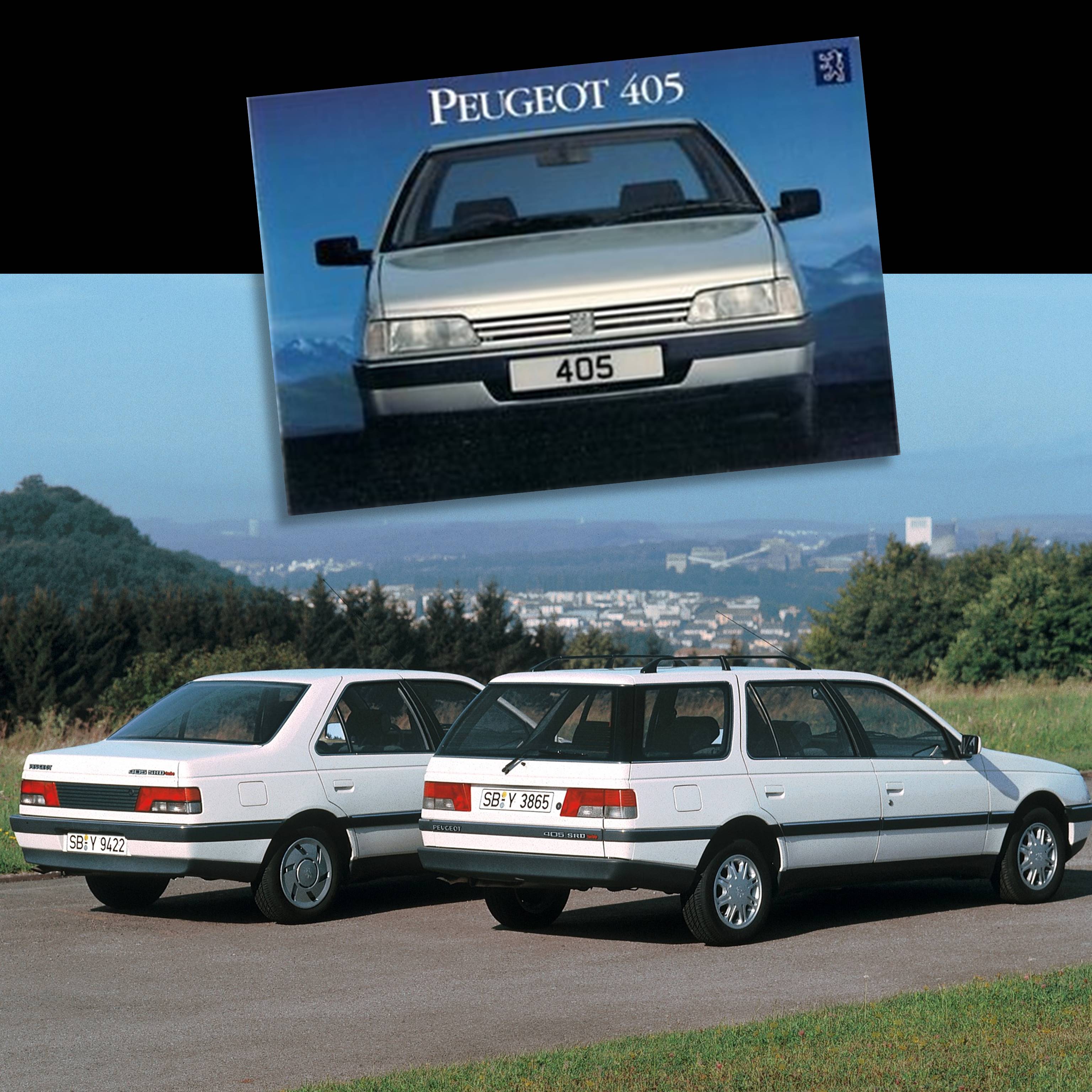 The 405 had a very modern appearance when it was introduced to the market in 1987, in which the
aerodynamicshere: letting the air pass by the car with as little resistance as possible
played an important part. Since the oil crises in the 1970s, reducing consumption had a major point of interest in the development of new cars. Between 1978 and 1985, Peugeot had done a lot of research into methods of making cars more economical with the VERA study models, the name standing for Véhicule Econome de Recherche Appliquée (Economic Vehicle for Applied Research). Many of the findings that were gained with this car were applied in the design of the 405. 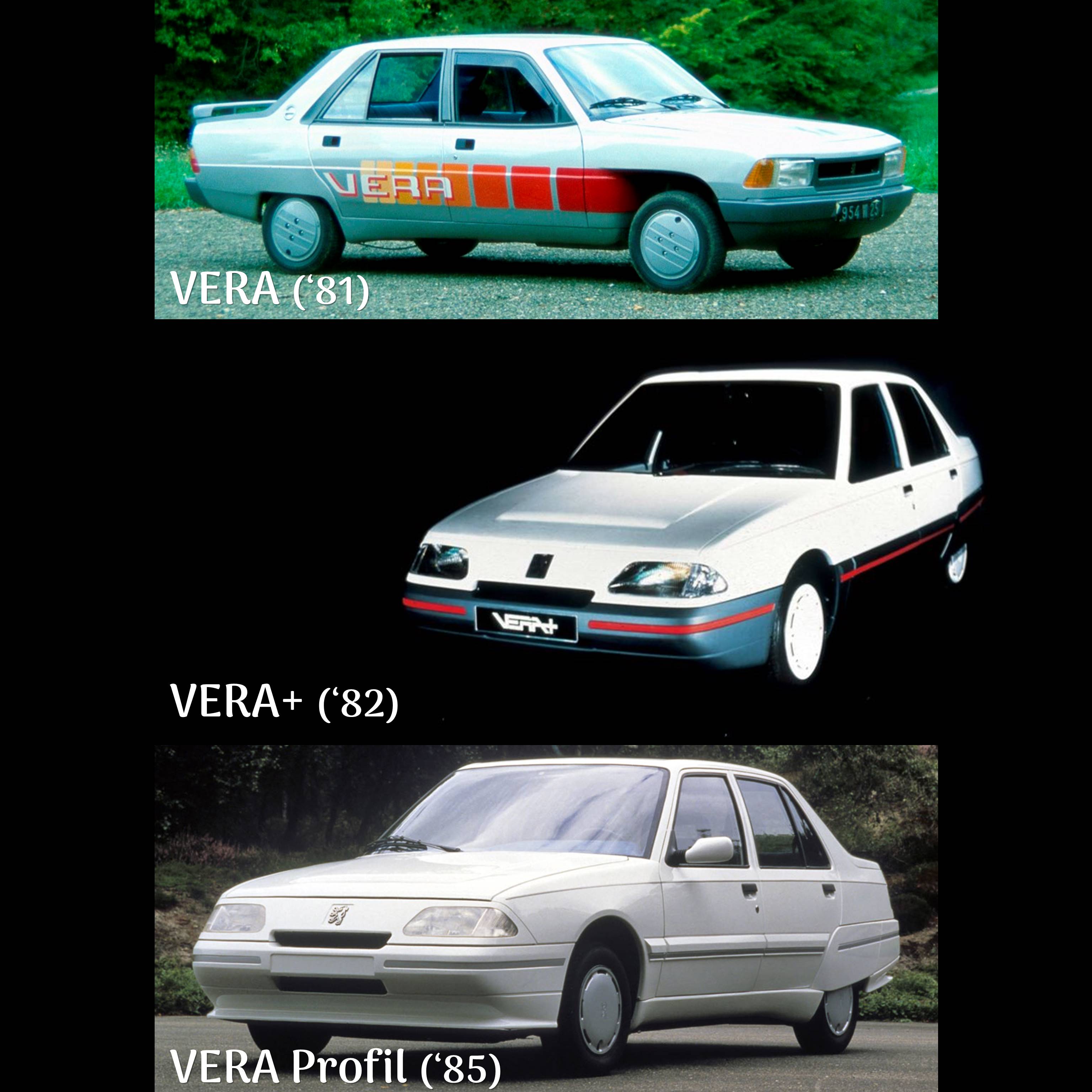 When designing cars, the assignment is given to several design teams, each of which comes with its own proposal within the set requirements. The starting point for the production model is then selected from those proposals. For decades, Peugeot worked with proposals from its own design team and from the Italian design firm Pininfarina, which created many of my favorite designs. In the case of the Peugeot 405, the Pininfarina design won and so this proposal was further developed into the final production model by the Peugeot team. 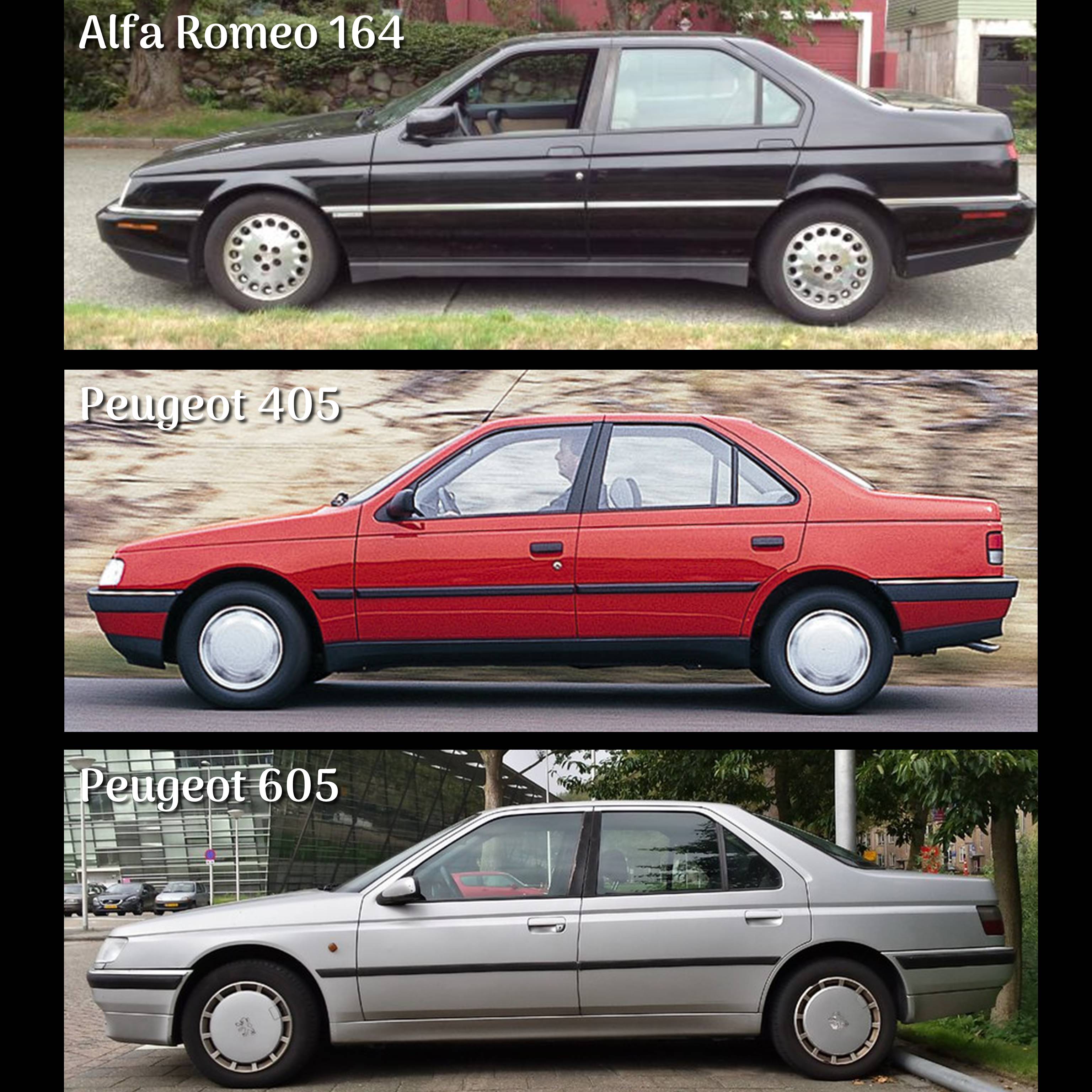 The fact that Pininfarina had left its mark on the design of the 405 is clearly visible when you put it next to two other contemporaries with a Pininfarina contribution: the Alfa Romeo 164 and the Peugeot 605 have a similar profile. Yet I've always liked the 405 better than the 164 and 605; I think because I have many memories of the first one.

My childhood is inextricably bound up with the Peugeot 405. As a child I sat in the back of both the
breakby Peugeot used name for a station wagon
and the
berlinea Peugeot used name for a sedan (or hatchback)
. One was a GLD ( Grand Luxe Diesel) and the other a GRD (Grand Royale Diesel). Even only those names give you a feeling of luxury. And then there was that delicious diesel roll! At that time I could distinguish the sound of the 1.9
PSAPeugeot Société Anonyme, parent company of Peugeot and Citroën, among others
diesel from other self-igniting engines. Diesels have a bad image (while they are often more economical and emit less CO2 than comparable petrol engines, and also have more pulling power on top of that), but I've always had something with that dark brown hum. If gasoline is tea, diesel is coffee. 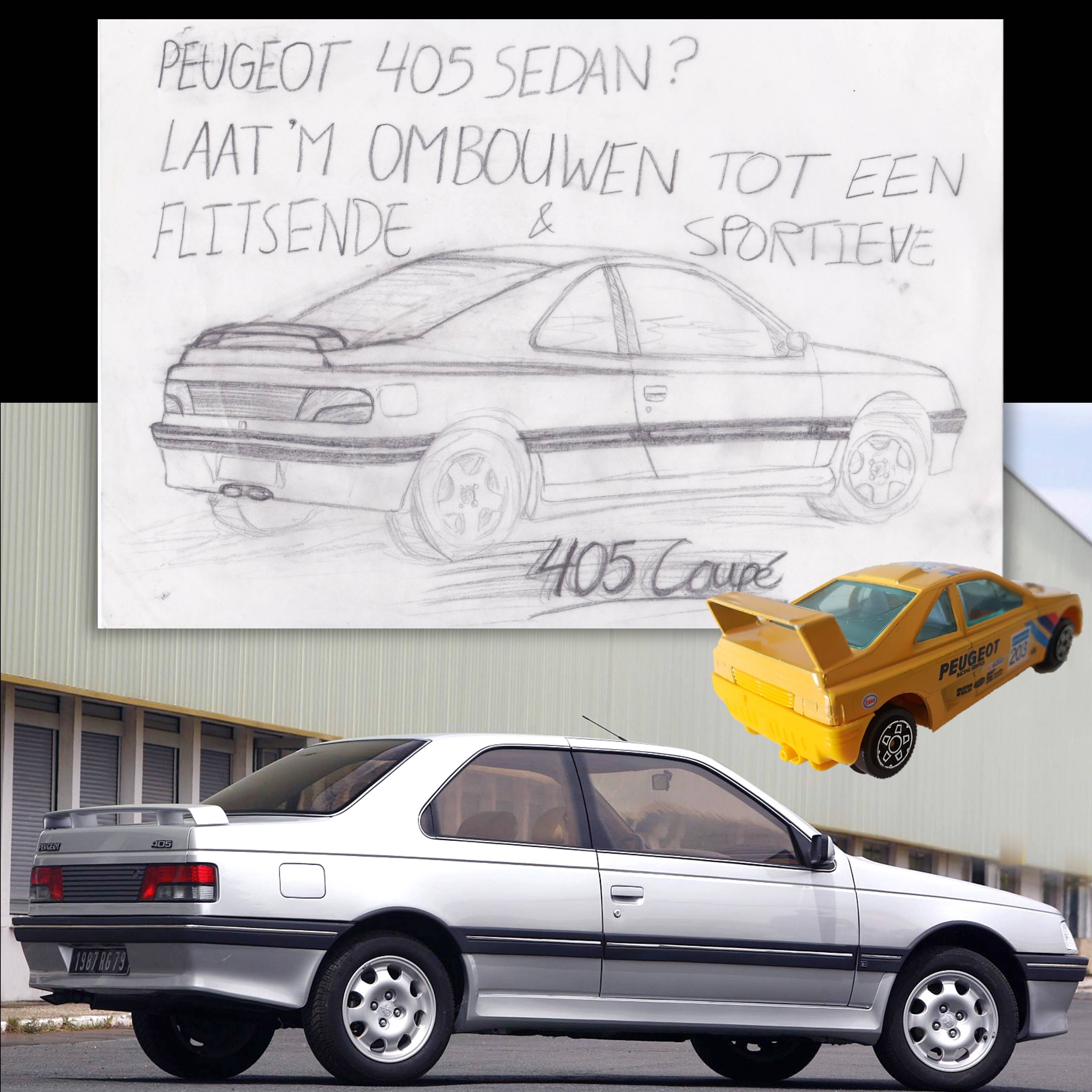 My drawing of a 405 Coupé, the Bburago car in question and the proposal by Heuliez

When playing with toy cars, I imitated the sound of a diesel, except for with sports cars. At the age of eight or nine I got a toy car from the Bburago brand at school at the feat of Sinterklaas, according to the package in scale 1:43. From that moment I collected those toy cars, of which I could buy one for the five guilders I got as pocket money back then. Part of my collection was a yellow Peugeot 405 T16 Grand Raid, the rally car with which Peugeot achieved many victories, including the famous Paris-Dakar rally. That Bburago car inspired me to draw a Peugeot 405 Coupé, because the T16 Grand Raid had coupé looks and Peugeot didn't build a coupé version of the 405 (however Heuliez did make a proposal). 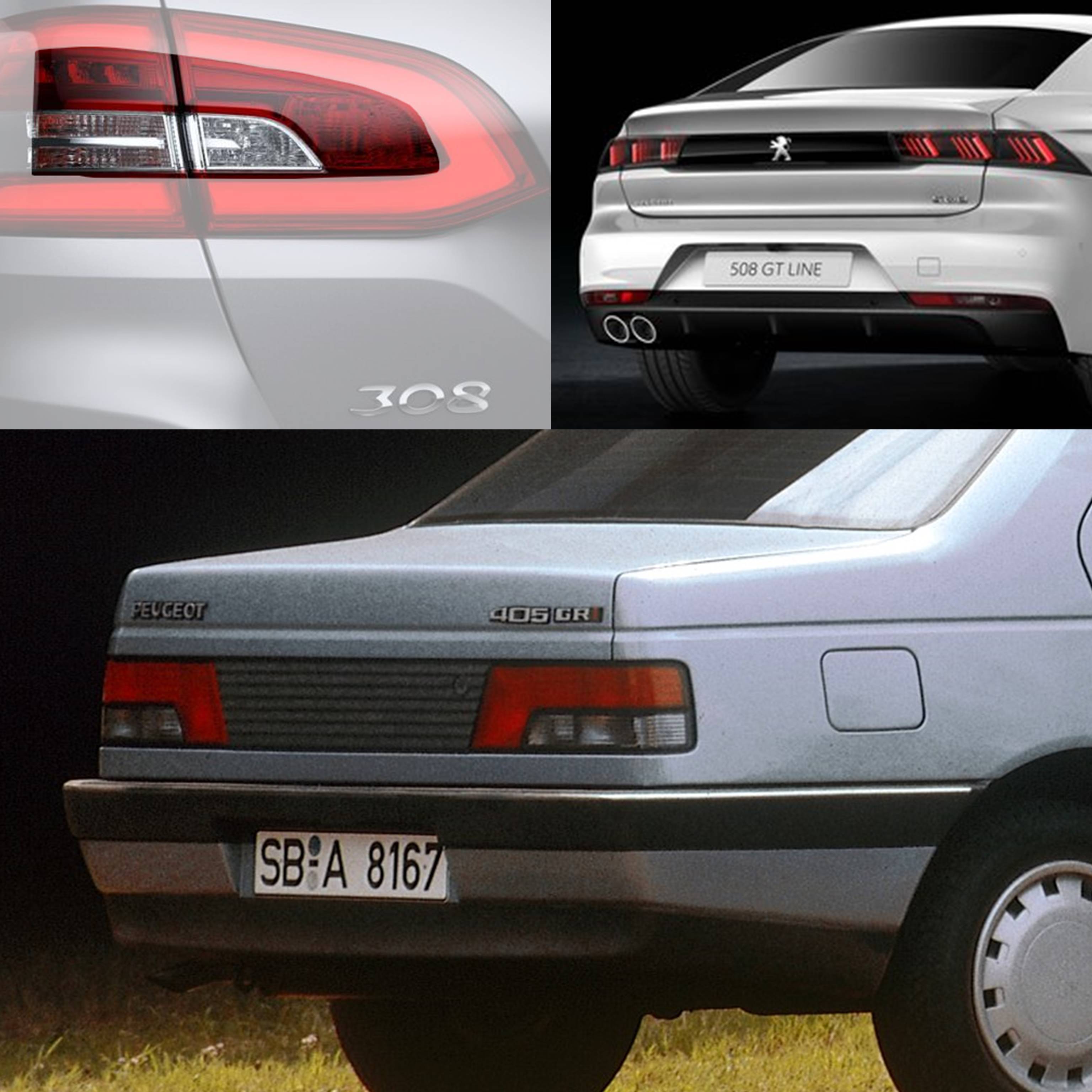 With or without a coupé version, the 405 clearly appealed to a lot of people, because in 1988 the model was named Car of the Year, with the highest score so far. And also afterwards no car came to the 464 points the 405 received; the Alfa Romeo 156 came closest in 1998 with 454 points. As the most convincing Car of the Year ever, you could call the Peugeot 405 the Car of the Century. Although I have to admit that I'm exaggerating a bit, because the election has only existed for just over half a century yet. Nevertheless, with the 405, Peugeot has undeniably delivered a great performance, and a timeless design that I could tell a lot more about; I have plenty of memories of it. That's why the 405 is rightfully one of my classics.

MY CLASSICS
In the My classics section, I add a model to my digital collection of classics every other week. For that, I select cars whose design appeals to me or evokes memories. So nostalgia, and very subjective. Hence the section title: my classics.
In the next episode: An Italian Dutch car...