Some artists don't have time going for them and therefore fall into oblivion. That was true for a while for Caravaggio, as far as I'm concerned it still applies to Bas Jan Ader and is without a doubt also the case for the Swedish artist Anders Zorn. In 1891-1892 he made two oil paintings and an etching entitled Omnibus, which beautifully illustrate what I appreciate in his work. 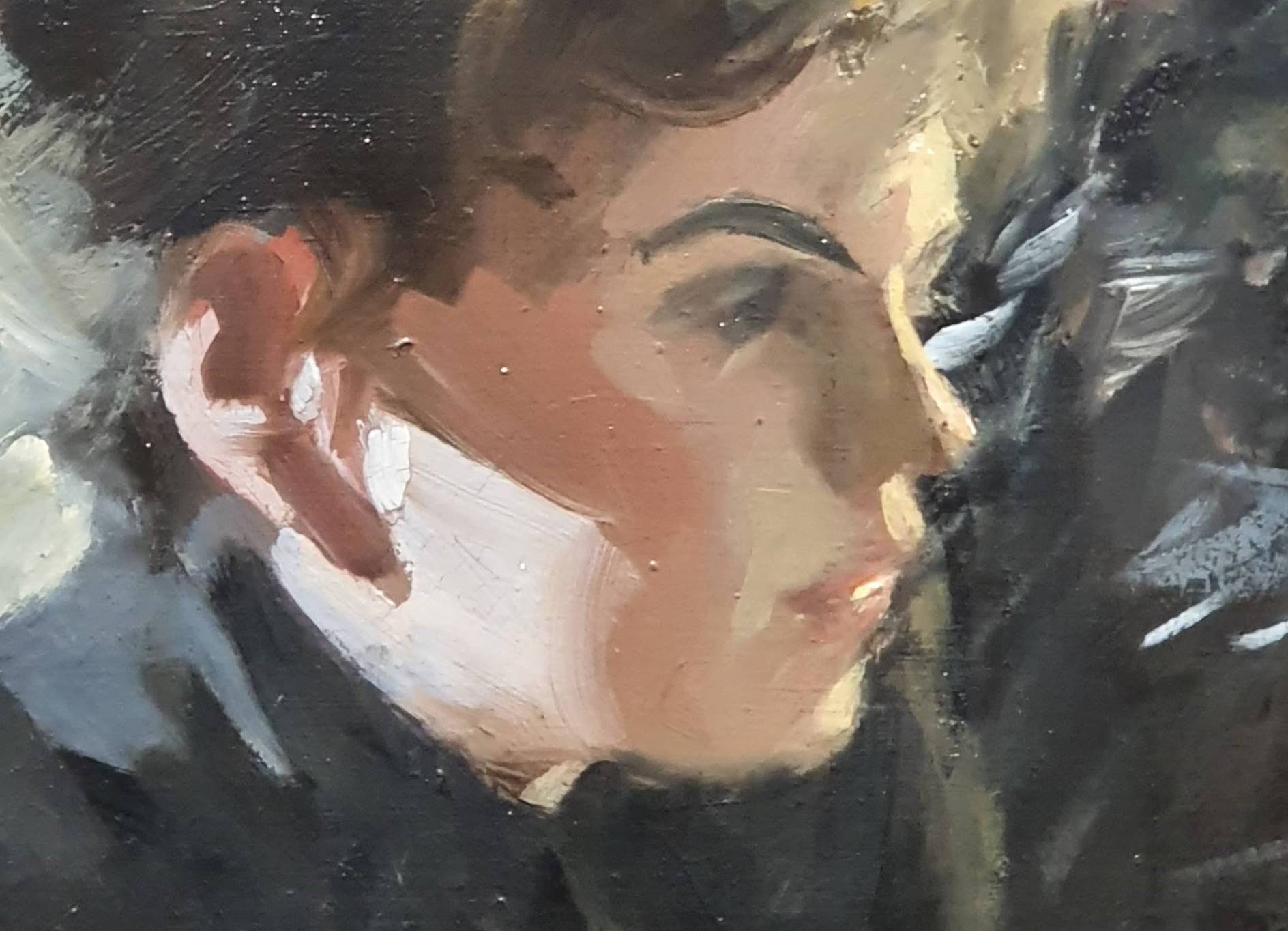 The art world is bigger than Paris
If you have to think of a country with the art of painting of, say, 1870-1900, it will not be Sweden that comes to mind first. The late 19th century is best known for what the Impressionists and their allies made in Paris. That does not mean, of course, that no-one was painting outside the French capital. For example, Vincent van Gogh (1853-1890) lived all in all only three years in Paris and only the last two years of his life in other places in France. The American James McNeill Whistler (1834-1903) painted his most famous work, Arrangement in Gray and Black, No. 1, better known as Whistler's Mother, in London in 1871. Around the same time, a certain Gustav Klimt (1862-1918) started his career as a painter in the Austrian capital Vienna and in Norway Edvard Munch (1863-1944) broke off his architecture studies in 1880 to become a painter. In the same year, at the student exhibition of the Royal Swedish Academy of the Visual Arts in Stockholm, a watercolour by Anders Zorn was shown. 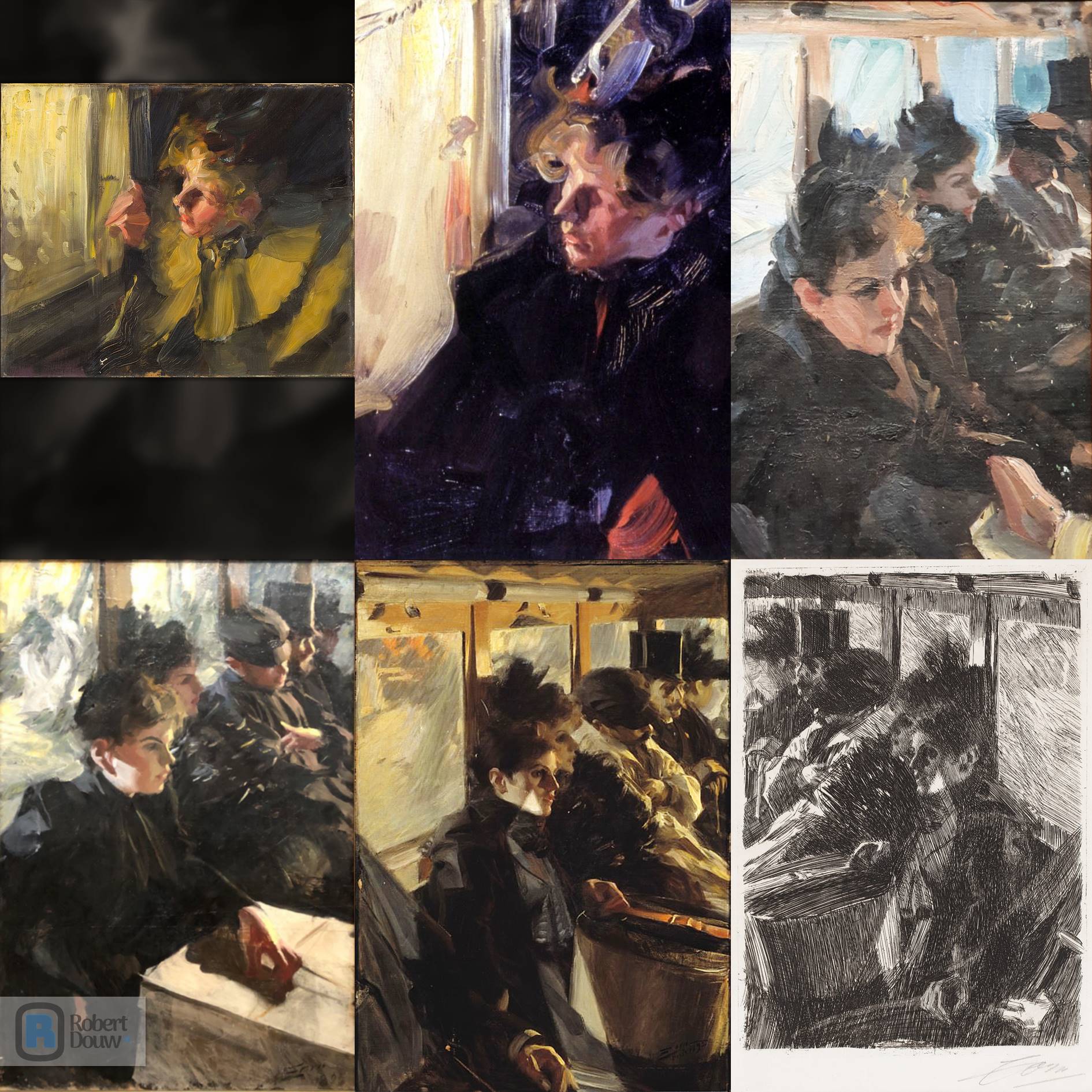 Tradition meets impression
If you compare the early work of Anders Zorn (1860-1920) with that of his contemporaries, it's striking how traditional his art was. Zorn then mainly worked with water colours and painted traditional Swedish scenes. In 1881 he traveled to Paris for the first time, which he would do more often in the following years. In 1887 he exhibited work for the first time at the Paris Salon: the large, leading art exhibition where impressionist works (which were of course not yet called that) had been refused more than twenty years earlier. Nevertheless, the influence of Impressionism can be seen in the work that Zorn made around that time. In the autumn of 1888, Zorn and his wife Emma moved to Paris. There he naturally came into contact with other artists, including August Rodin, Edgar Degas and Auguste Renoir. Zorn also admired the work of Éduard Manet, of whom he also owned a painting for a while. Anders and Emma continued to live in Paris until they returned to Zorn's birthplace Mora in Sweden in 1896, where he died in 1920 and where the Zornmuseet (Zorn Museum) is still located today. This is mainly due to his wife Emma. In the then art world he was often seen as a painter of the establishment, as a painter from a bygone era. Explainable, in the spirit of the times, but unjustified in my opinion. 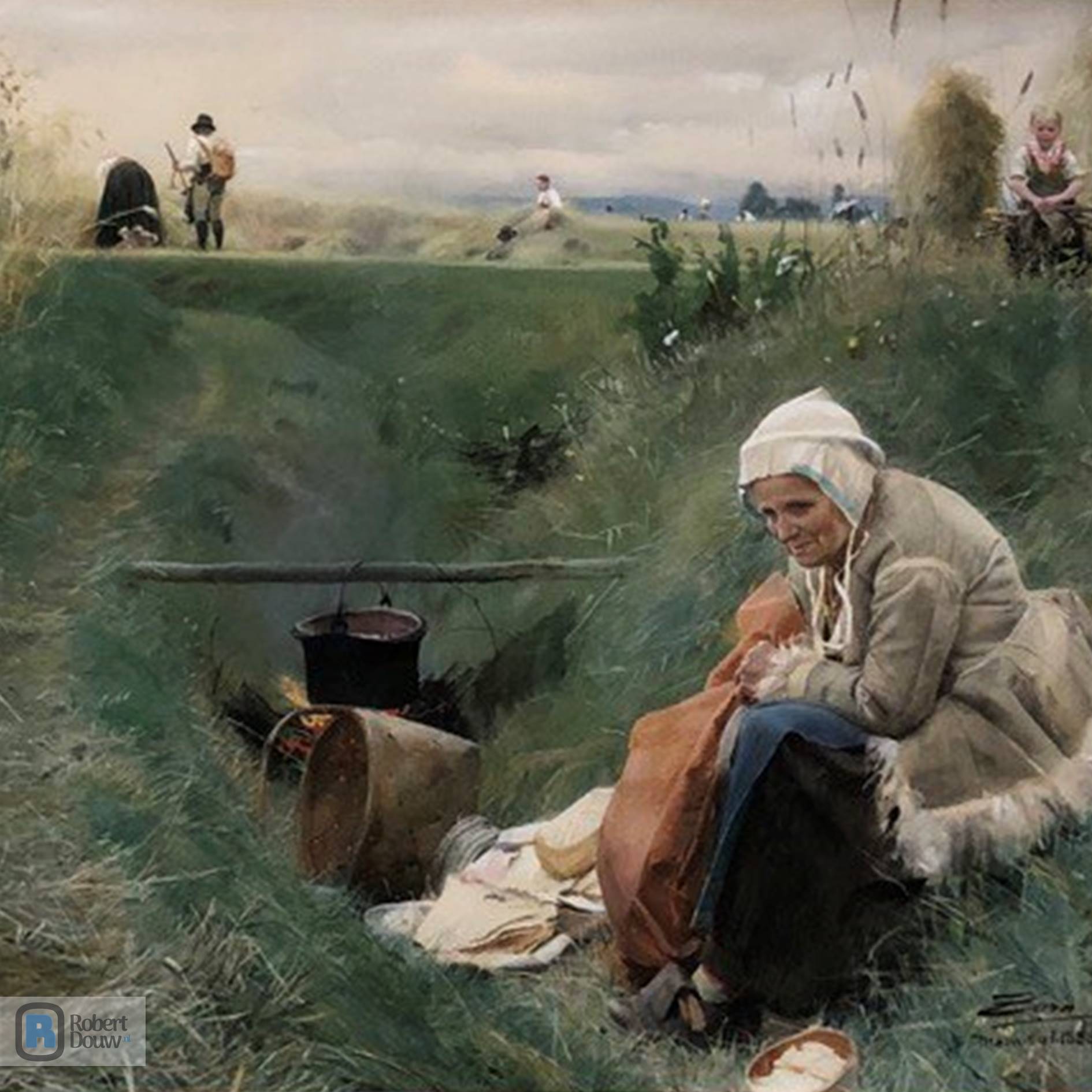 Inspiration for a multi-talent
Like all visual artists, Anders Zorn was also inspired by his great examples. It is known, for example, that he was fascinated by the work of the Swedish painter Egron Lundgren, specialized in water colours, of whom he visited an exhibition in 1876. Zorn adapted what he saw and made his breakthrough in 1880 with a work in water colour, a technique he continued to use throughout his career, as did gouache ("opaque watercolour"), even after adding oil paint to his arsenal from 1887. I find it really incomprehensible what that man could do with watercolour. Another technique in which Zorn made a number of masterpieces is etching. Here too he was inspired by a great master: his extensive collection of etchings by Rembrandt can be seen in his former country house Zorngården – an additional reason to put a visit to Sweden high on my wish list, for when we are allowed to travel abroad again. The multitalented Anders also made three bronze sculptures, which look as if he did nothing else and which remind me a bit of Degas's three-dimensional work. There are many more examples of influences, but what interests me most is the influence of 'Impressionism'. In the course of his oeuvre you see that Zorn paints more and more loosely. As far as I'm concerned, that's where he takes his work to a higher level, from – put disrespectfully – images to works of art. And that finally brings us to the work from the title of this piece. 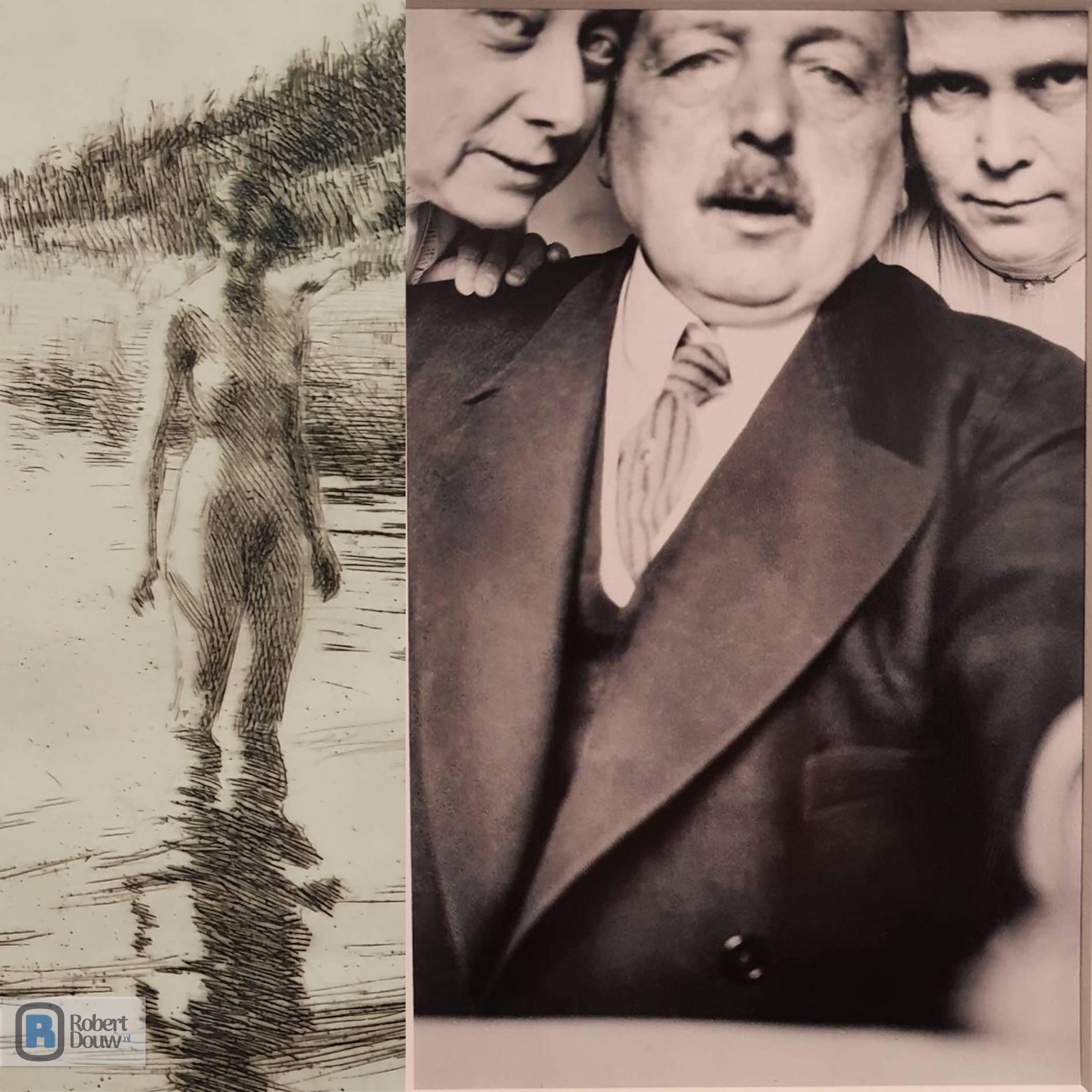 Left: also many suggestions in this detail from the etching Shallow water, 1913. Right: selfie avant la lettre, with Anders Zorn in the middle and his wife Emma on the left

Not an impressionist
The quick way of painting and the loose touch that Zorn developed towards the end of the 19th century, can be seen in the different versions of Omnibus. Zorn was not an impressionist in the literal sense of the word; of course every work of art is an impression of reality, but Zorn was not quick to capture exactly what he saw at that moment, as the Impressionists did. Zorn made preliminary studies and thus devised his compositions and he used a grayer palette than, for example, Monet. In many of his paintings he mixed his colours based on a limited palette known as the Zorn Palette, with titanium white, yellow ocher, cadmium red light and ivory black. The latter is a cool black, so you can wonderfully mix bluish and greenish tones with these four colours. I imagine Zorn studied the then very recent works of the Impressionists in Paris and took from them what suited his way of working, in order to enrich it, just as he had done with the work of Egron Lundgren. This resulted in strong works with many fine details, which, viewed in isolation, are little more than an apparently random paint spot, but which turn out to be completely correct within the whole. 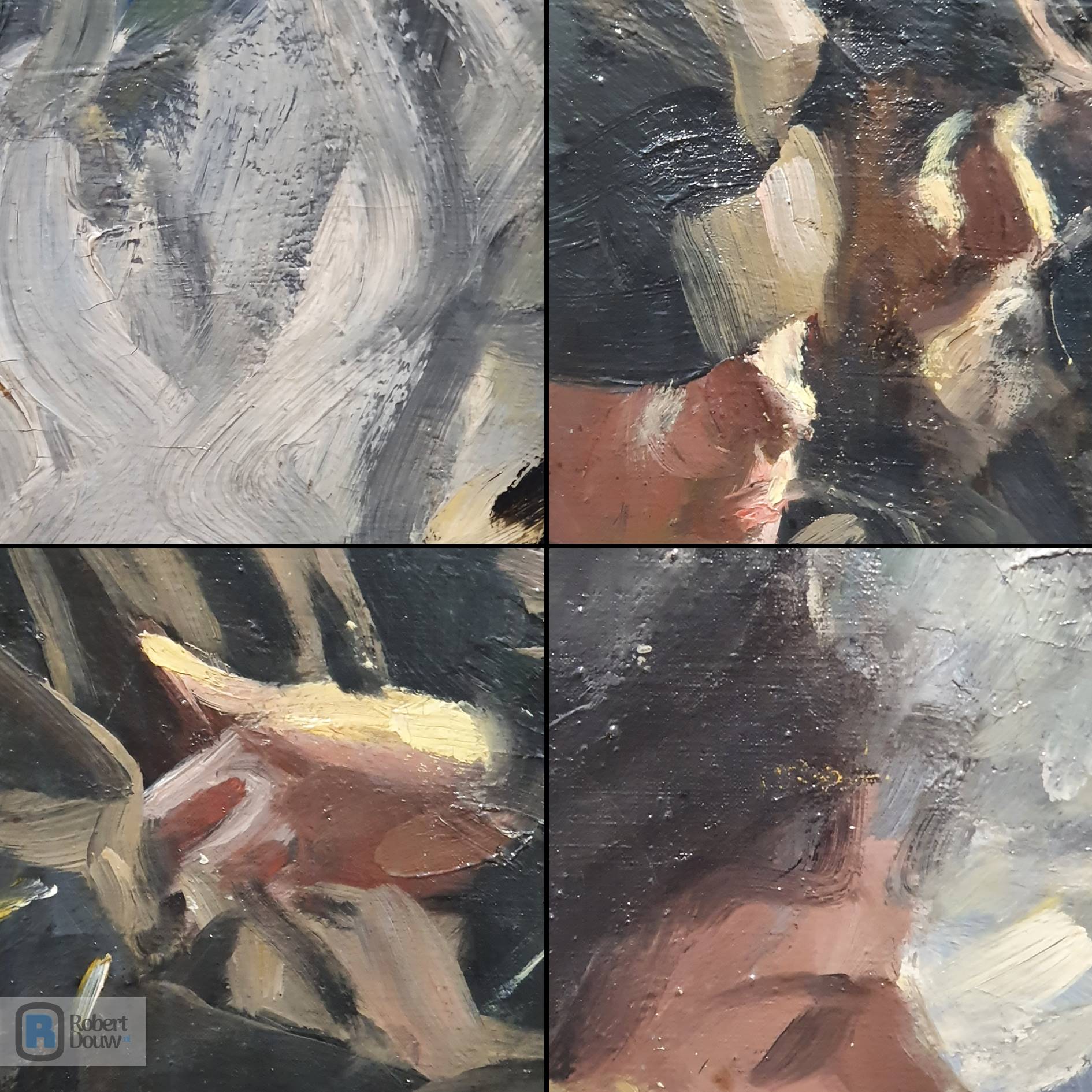 Suggestions in the omnibus
Take, for example, the men in the background in the version of Omnibus from 1891-1892: the light on the sleeve, the hand, the contours of the face: with a few quick brushstrokes Zorn puts the figures down, as if he had actually been painting in the omnibus (a horse-bus). Or look at the window to the left behind the lady in the foreground: isolated they are abstract blobs of paint, but on the whole it is credible as the window of a moving bus. That Zorn did not paint this in a moving bus, that he positioned the figures the way he wanted them, and that he adjusted the colours to fit within the composition, is apparent from the oil study (1981-1892) and the later version of the painting (1892). In the latter version, the colours are brighter and the light on the front figure is more pronounced due to the sharp shape, which can also be seen in the etching of the same scene, also from 1892. I don't really know which version I like best; they each have their own charm. But what I appreciate in all versions and in a lot of other works by Zorn, and not just a little bit, is how he calls up suggestions, how he makes me believe, as a viewer, with a quick touch or a loose scratch with the etching needle that someone is sitting or standing there and that I'm not looking at a flat surface, but am with those characters and objects in a space. Masterful!


Images: Own pictures, made at the exhibition Anders Zorn; De Zweedse idylle, supplemented with an image from Wikimedia Commons, from gallerix.org and from arthur.io.