In Dutch, and I think also in Frisian, the most important information in a sentence is usually as far to the right as possible. With gortepap and sûpengroatenbrij, it is the pap or brij that matters, the rest is additional information. And so I have now arrived at the most important part.

In two previous blogs I discussed karnemelk (buttermilk) and gort (barley). You'd almost think this is a food blog, but in for sûpengroatten, in for brij, so in this piece I'll go and see what I can make from the information I found about the words pap ('porridge') and brij ('gruel'). The first thing that strikes me is that pap is defined in the EWN as "brei" with '-ei', just like in the German spelling of the word for pap. My paper Van Dale dictionary only knows the spelling with '-ij' and in the Woordenlijst ('official' list of Dutch words) of the Taalunie brij in the meaning 'porridge' only occurs with '-ij'. 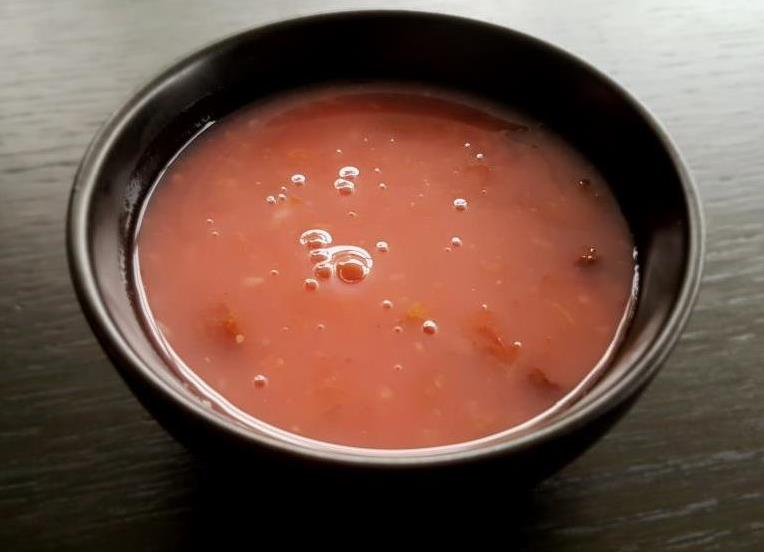 'Krentjebrij', a porridge-like dessert with juice of berries that's known in certain parts of the Netherlands

You could call the word brij 'more West Germanic' than pap. After all, we know the word brij in both Dutch and Frisian, there is the German word Brei and in Old English briw was used. Of these four languages, the word pap can only be found in Dutch, where it has become more or less the standard word for what was previously called brij. The EWN reports on this: “The initially limited distribution, only Dutch, Low German and Rijnlands, is according to Frings (1932), however, an indication that the word was taken from Romance. You can then compare, for example, Italian pappa 'kid's porridge' and Latin pappa 'gruel, porridge' and pappare 'eating porridge'”.

Nowadays brij is in fact only used figuratively in Dutch, in sentences such as 'een brij van woorden' (literally 'a mush of words', meaning 'an inconsistent amount of words without clear meaning'). It would come from the reconstructed word bher, which must have meant 'bubbling up' or 'boiling'. That sounds logical, since you have to cook the mush (or porridge) when preparing it. Only, the OED doesn't seem to agree with that completely. As a definition of *bher- they give "to carry" / "to bear children" or "bright; brown". At the word broth they refer to *bhreu- with the meaning "to boil, bubble, effervesce, burn". Even then, the brew has something to do with boiling.

Wherever the word brij may come from, it is a clear example of a common Frisian word that is the same as (or looks like) an outdated Dutch word. My feeling is that there are quite a few examples of this - it will probably return in this section. I was told that the Dutch standard language was originally mainly influenced by the Brabant and Holland dialects, and I can imagine that by trading there they came into contact with, for example, Italian words such as pappa rather than in Friesland. I think the need to use other words than what was common would have been less there. And why would you make it difficult, then?

In contemporary English the words porridge and gruel are used for pap. The first has a very different origin from everything I have discussed so far, so I will leave that be for now. Gruel, on the other hand, takes us back to what I wrote two weeks ago about grut, from which gort is derived. That grut could be traced to greot, a Frankish word. In Old English there was a word that you write the same and that I suspected to be related. For this piece I looked up the word gruel, and the dictionary referred me to grit, of which it says that the Old English greot is derived of the Proto-Germanic *greutan, the source of the Old Frisian gret and the German Grieß, among others. Reference is also made to those words in the EWN, under grut. So those words all seem to be related and that is why I think the Frankish and Old English greot is basically the same word, as I suspected. And with that, it's time to put an end to this triptych and tap into a new topic.


WEST GERMANIC
In the West Germanic section every other week I discuss a word that strikes me. I look at the meanings and forms of the word, and especially at where the word originates from. With that I compare the four West Germanic languages Dutch, English, Frisian and German, with the occasional inevitable trip across the fictional West Germanic border.
In the next episode: What does a dull company have to search for in the ground?